U.S. ships pack up, leave ahead of scheduled end of war games 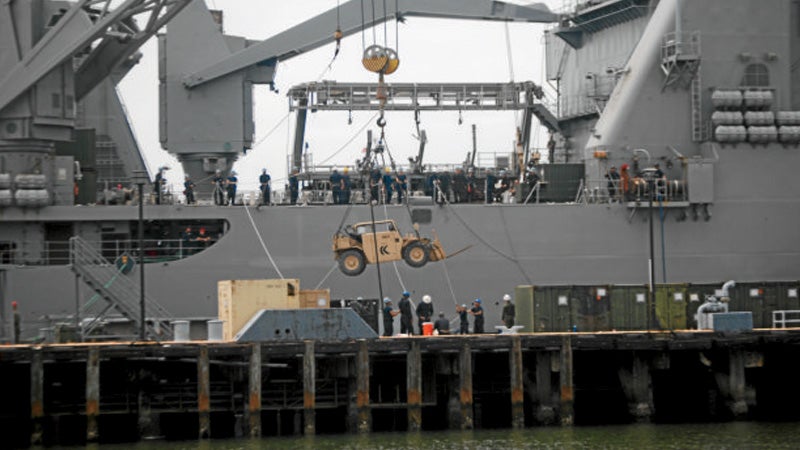 ALL ABOARD American Marines from the USS Germantown load military vehicles and other equipment back into their ship at noontime on Tuesday as they prepare to leave Subic port. The US warships that participated in the joint bilateralmilitary exercises dubbed Philippine Amphibious Landing Exercise (Phiblex 33) have all left as the war games ended earlier than scheduled. —ALLANMACATUNO

SUBIC BAY FREEPORT—Four US warships left this free port and closing ceremonies were held in Taguig City on Tuesday, a day before the scheduled conclusion of this year’s joint military drills between Filipino and American troops.

The joint marine landing maneuvers called Philippine Amphibious Landing Exercise (Phiblex 33) ended on Monday, although the drills were scheduled to run until Wednesday.

The last round of the war games, including a combined live fire exercise, was held at Crow Valley in Tarlac province.

US Marines from the USS Bonhomme Richard and the USS Germantown were seen loading military vehicles and other equipment back to their ships on Tuesday noon. The ships were scheduled to leave later that day.

The USNS Fall River and the USS Green Bay left the port on Tuesday morning, according to the seaport department of the Subic Bay Metropolitan Authority.

Closing ceremonies were held at the Philippine Marine Corps headquarters in Taguig City also on Tuesday, a day ahead of schedule reportedly to accommodate the guest of honor, Supreme Court Associate Justice Antonio Carpio.

Brig. Gen. John M. Jansen, commander of the US 3rd Marine Expeditionary Brigade, said he was impressed by the professionalism and capabilities of all the forces involved in the drills.

It was not clear whether the early end of Phiblex 33 was a response to President Duterte’s recent assertion that the joint exercises were the last of his six-year presidency.

Mr. Duterte, who identifies himself as a socialist, has also said he wants US forces out of Mindanao so he can talk peace with Moro separatists on the island who have not forgotten US atrocities there during the Moro wars of the early 20th century.

US officials say, however, that despite Mr. Duterte’s public remarks, his administration has made no formal requests to halt any programs. Nor has it followed up on Mr. Duterte’s threat to eject US forces from Mindanao, where a rotating force of 50 to 100 troops helps the Philippine Army combat Abu Sayyaf bandits.

But in the latest of his near-daily tirades against the United States, Mr. Duterte said on Tuesday that he would eventually break up with Washington, which he told to bring its military aid elsewhere.

The United States is giving the Philippines over $90 million in military aid this year and has provided more than $1 billion in nonmilitary support over the last five years, US officials said.

On Friday, Defense Secretary Delfin Lorenzana said “we can live without” US military aid.

On Tuesday, Lorenzana insisted during a Senate budget hearing that the Philippines would survive without US military aid.

He said the Philippines could look to other allies for support, including Australia, Japan and South Korea.

Lorenzana said, however, that Mr. Duterte was not abrogating the Mutual Defense Treaty with the United States.

Some of the tension between Mr. Duterte’s administration and Washington has come from international outrage over the Philippine leader’s brutal war on illegal drugs, which has led to the killing of more than 3,600 people.

It was his concern that Western powers would lecture him on human rights that prompted Mr. Duterte’s denunciation of US President Barack Obama, as well as similar tirades against the United Nations and the European Union.

US military officials said they were well aware of Mr. Duterte’s comments, but their counterparts in the Philippines had reassured them that business continued as usual.

Speaking in Malacañang on Tuesday, Mr. Duterte said he would not cancel the Philippines’ defense treaty with the United States, toning down his rhetoric after his senior adviser, former President Fidel Ramos, chastised him for making “discombobulating” statements against the country’s longtime ally. —WITH REPORTS FROM TARRA QUISMUNDO, CYNTHIA D. BALANA AND GIL CABACUNGAN IN MANILA