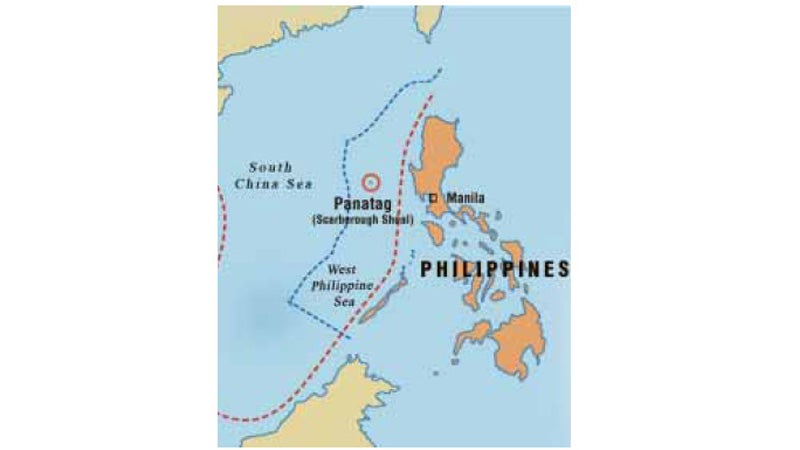 President Duterte has a “good feeling” that the Philippines will be “OK” with China as long as the Filipinos do not make the Chinese froth at the mouth by claiming Scarborough Shoal.

“We cannot win that,” he said in a speech to residents of Lamitan, Basilan province, on Monday, referring to the traditional fishing ground known to Filipinos as Panatag Shoal that China seized from the Philippines after a two-month maritime standoff in 2012.

Without military muscle to fight for Panatag, the Philippines sued China in the UN-backed Permanent Court of Arbitration in The Hague, asking the court to invalidate Beijing’s claim to nearly all of the South China Sea and demanding Manila’s right to fish and explore for resources in waters within its 370-kilometer exclusive economic zone (EEZ) be respected.

On April 8, presidential candidate Rodrigo Duterte told a news conference in Puerto Princesa City, Palawan province, that, if elected, he would protect Philippine territory and he was willing to be blasted into pieces for it.

“I will ask the Navy to deliver me to the nearest area tolerable to them and I will ride a jet ski and carry a pole and a flag. When I reach the Spratlys I will erect the Philippine flag,” he said.

“You want to shoot me with your missile, fine,” he added, referring to the Chinese.

He repeated his pledge during a presidential debate organized by ABS-CBN on April 24.

On July 12, the Hague court ruled in favor of the Philippines, saying China’s claims in the South China Sea had no legal basis and that Beijing had violated Manila’s sovereignty by preventing it from fishing and exploring for resources in waters within its EEZ.

Panatag is for all

The court, however, ruled that Panatag Shoal, which does not generate an EEZ, is a common fishing ground—meaning all the claimants can fish there.

But China rejected the ruling. It has cordoned off Panatag and drives Filipino fishermen away from the shoal.

On Monday, President Duterte, who is visiting China from Oct. 19 to 21 to begin mending ties between the two countries that have been frayed by the dispute, said a key strategy of his China initiative was not to make an issue of the tribunal’s ruling.

“I have a good feeling that we will be OK with them. But first let’s not touch the Scarborough Shoal issue because we cannot win that,” he said.

“Even if we get angry, we’ll just be putting on airs. We can’t beat [China]. We’ll ask them to allow our fishermen to [return] to their traditional fishing ground in Scarborough,” he said.

Mr. Duterte said he had already agreed to “this concession” in return for China’s relaxing its quarantine restrictions on banana and pineapple exports from the Philippines.

He promised the people of Basilan his administration would make up for the government’s neglect of the war-torn island if he got a windfall from his China visit.

“I have a good feeling they (China) really want to help us in a big way. If I get something big, I promise you I will build hospitals and schools from the soft-term loans we will get (from China). If there is anything left, I will use it to help you build a power plant,” he told the residents of Lamitan.

He said the power plant, which would be powered by sea waves, would be a catalyst for change in the lives of the people of Basilan.

Mr. Duterte gave P10 million in seed money for livelihood projects of coconut farmers in Lamitan and Isabel towns whose farms had been ravaged by cocolisap.