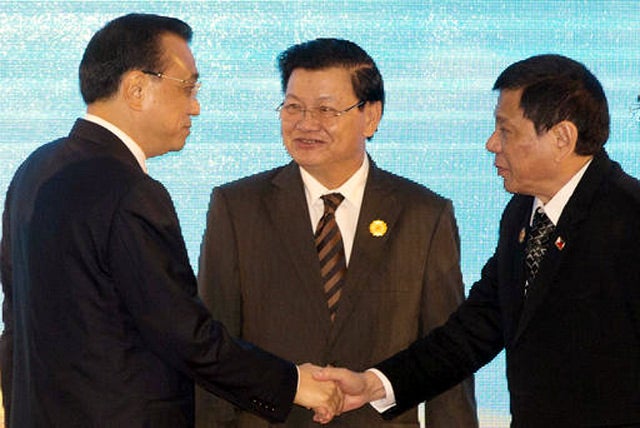 MANILA — President Rodrigo Duterte has a “good feeling” about his upcoming meeting with  Chinese President Xi Jinpeng  as he expects a bonanza of loans and trade deals from the much-anticipated state visit.

In a speech in Lamitan, Basilan, on Monday, Mr. Duterte promised residents that the government would be able to make up for its neglect of the war-torn island if he would get a windfall from China in the state visit on October 18 to 21.

“I have a good feeling that we will be ok with them (China). But first let’s not touch the Scraborough issue because we cannot win that,” said the President.

He said a key strategy in his Chinese initiative has been not to make an issue of the United Nations arbitral ruling  on the country’s territorial rights in the South China Sea, specifically Scarbrough Shoal where China has reportedly planned to reclaim just like the artificial island it built in the disputed Spratlys archipelago.

“Even if we get angry, we’ll just be putting on airs. We can’t beat them. We’ll ask them to allow our fishermen to their traditional fishing grounds in Scarborough,” said the President.

Filipino fishermen have yet to be allowed to return to Scarborough as China has refused to honor the July 12 decision of the Permanent Court of Arbitration to void China’s maritime claim based on its nine-dash line.

Duterte claimed China has agreed to cooperate in allowing fishermen back to Scarborough Shoal as well as relaxing its quarantine restrictions on banana and pineapple exports to China.

“I have a good feeling they (China) really want to help us in a big way. If I get something big, I promise you, I will build hospitals and schools  from the soft-term loans we will get (from China). If there is anything left, I will use it to help you build a power plant,” said Duterte.

The President said the power plant, to be powered by ocean waves, would be a catalyst for change in the life of Basilan residents.

“The government has failed you many times,” said Duterte.

The President gave P10 million in seed money for livelihood projects of coconut farmers in Lamitan and Isabela in Basilan whose farms were ravaged by cocolisap.