US to PH: Our alliance remains a key source of stability in Asia | Global News

US to PH: Our alliance remains a key source of stability in Asia

The United States on Tuesday highlighted its partnership with the Philippines at the opening ceremonies of the potentially last joint war games under the administration of President Rodrigo Duterte.

“Finally, in the 65th year of the Philippine-US Mutual Defense Treaty, our alliance remains a key source of stability in the Asia Pacific region…The recurrence of Phiblex (Philippine Amphibious Landing Exercise) reinforces the US and Philippines’ commitment of our long-time partnership,” said Brig. Gen. John Jansen, commander of the 3rd Marine Expeditionary Brigade of the US Marine Corps.

Humanitarian civic assistance efforts, an amphibious landing exercise, and live-fire training featuring artillery are some of the activities for the two-week 33rd iteration of the Phiblex held in several areas in Luzon.

About 1,400 U.S. service members based in Okinawa, Japan and 500 Filipino military personnel will participate in the joint exercises.

Last week, the President said he would put an end to the joint war games with the US, one of the closest allies of the Philippines, which it has a 65-year-old mutual defense treaty. 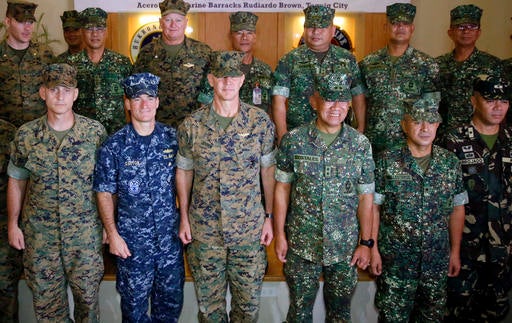 U.S. Marines Brig. Gen. John Jansen, third from left front row, of the 3rd Marine Expeditionary Brigade and Maj. Gen. Andre Costales, third from right front row, Commandant of the Philippine Marines Corps, pose with other military officers following the opening ceremony for the 33rd joint U.S.-Philippines amphibious landing exercises dubbed PHIBLEX at the marines corps in suburban Taguig city, east of Manila, Philippines Tuesday Oct. 4, 2016. President Rodrigo Duterte said he was giving notice to the United States, his country’s long-standing ally, that joint exercises between Filipino and American troops this week will be the last such drills. He told the Filipino community in Hanoi, Vietnam’s capital, last week that he will maintain the military alliance with the U.S. because of the countries’ 1951 defense treaty. But he said this week’s exercises will proceed only because he did not want to embarrass his defense secretary. (AP Photo/Bullit Marquez)

READ: US-Philippine drills open in uncertainty: Are they the last?

Duterte also threatened to scrap the Enhanced Defense Cooperation Agreement with the US signed in 2014.

“Through Phiblex, we are able to focus on opportunities that enable my Marines to develop capability and enhance personnel capacity to address various challenges that are regularly identified, cultivate support from our domestic allies for national initiatives and priorities and promote cooperation in addressing regional and international issues,” said Marines chief Maj. Gen. Andre Costales. JE

US Embassy: No plan to bring back American bases in PH