US Embassy: No plan to bring back American bases in PH | Global News

US Embassy: No plan to bring back American bases in PH 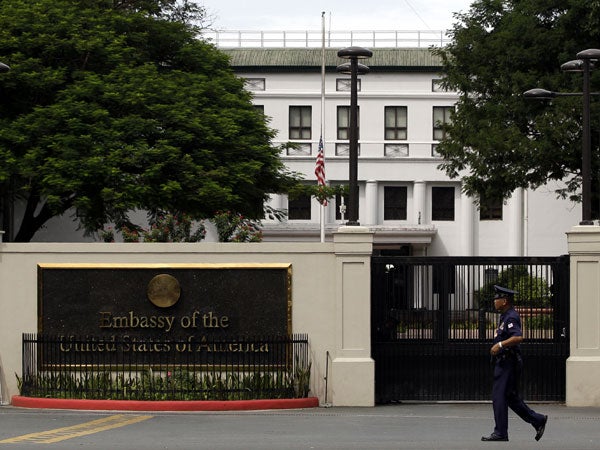 MANILA — The US has no plans of reopening military bases in the Philippines and nowhere in the PH-US Enhanced Defense Cooperation Agreement (EDCA) provides for such, according to the US Embassy in its Tuesday (Oct. 4) statement.

In his fresh tirade against the United States, President Duterte over the weekend threatened to stop the implementation of the EDCA, which he pointed out as merely an executive agreement since it was not signed in 2014 by then President Benigno Aquino III.

The warning came as he rehashed his disgust over the US in response to its admonitions over his brutal war on drugs during the 37th Maskara Festival in Bacolod City on Sunday.

In his speech, he disclosed that his administration has started reviewing the EDCA, which was signed two years ago by then defense secretary Voltaire Gazmin and a US aide but was not implemented until the Supreme Court upheld its constitutionality last January.

“Better think twice now because I would be asking you to leave the Philippines altogether,” Mr. Duterte had said.

In the same speech, the President also apologized to the Jewish community for his comments drawing parallels between his war on drugs and Adolf Hitler’s genocide of Jews before and during the World War II.

His earlier remarks drew condemnation from the United Nations, German and Israeli governments, the Pentagon and international rights groups.

In a statement, Koscina said the Embassy has not been officially contacted by Philippine authorities about the President’s recent statements on the EDCA.

“EDCA is a mutually beneficial agreement, which will, among other things, enhance our ability to provide rapid assistance in the Philippines in cases of natural disasters by allowing us to pre-position relief and other supplies,” said Koscina.

She also said the US government would continue to focus on its “broad relationship” with the Philippines, anchored on shared values and beliefs, including in human rights and dignity.

The US embassy said it was “deeply troubled” by Mr. Duterte’s Hitler remarks and that it was also aware of his apology to the Jews.

“We continue to focus on our broad relationship; one of the most enduring and important relationships in the Asia Pacific Region,” said Koscina.  SFM