Duterte, Hitler and the zeal to kill 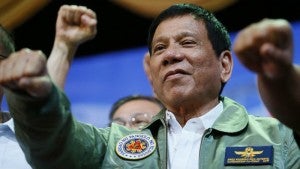 And now the latest from the leader who inspired the Duterte bloodbath: “Hitler massacred three million Jews. Now there is three million, there’s three million drug addicts. There are. I’d be happy to slaughter them.”

President Duterte has apologized for this statement, though he also threatened to kick the lawyers who keep complaining about the state of human rights in the Philippines.

But let’s give him some credit: Digong also has, at least, corrected himself on the historical record.

The number of people Hitler slaughtered would make up more than half the current population of Metro Manila. Duterte downsized that terrible statistic to just the combined populations of Manila and Quezon City.

“What President Duterte said is not only profoundly inhumane, but it demonstrates an appalling disrespect for human life that is truly heart-breaking for the democratically elected leader of a great country,” Ronald Lauder, president of World Jewish Congress, said.

Todd Gutnick of the Anti-Defamation League in the US said it was “baffling why any leader would want to model himself after such a monster.”

The controversy may now fade away after Digong said, “Sorry ha,” but with uncharacteristically elegant and polite language that he or his speechwriters probably crafted with the help of a thesaurus.

“There was never an intention on my part to derogate the memory of 6 million Jews murdered by the Germans,” Duterte said. “I apologize profoundly and deeply to the Jewish community.”

Now this is not meant to derogate my friends who still support Digong, but what is profoundly and deeply troubling is this: This president whom his supporters believe will lead the way to a better life for Filipinos clearly has very little regard for life.

Let’s go back to the statement that provoked worldwide outrage: “Hitler massacred three million Jews. Now there is three million, there’s three million drug addicts. There are. I’d be happy to slaughter them.”

The focus understandably has been on Duterte comparing himself to the notorious Nazi dictator and the holocaust.

In normal times — that is, in times when a president cracking jokes about raping a woman hostage, or cursing the Pope and other world leaders are not the norm — that last sentence would have also sparked strong reactions: “I’d be happy to slaughter them.”

But the nation and the rest of the world have gotten so used to Duterte’s bloodthirsty rhetoric and the consequences of his pronouncements that the last sentence just seemed like another crazy, troubling statement from the new leader in Malacanang.

It’s not that shocking for many Filipinos today: Their president declared his zeal to kill by evoking the memory of one of the most notorious mass murderers in history.

Duterte acknowledged that what he said probably left “a bad taste in the mouth” in the Jewish community.

If only Digong could recognize the atrocious taste left by an even greater offense: the slaughter and execution without due process of more than 3,000 Filipinos. And the culture of mean-spirited violence emerging under his leadership.