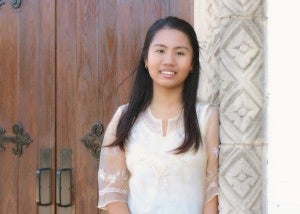 SAN FRANCISCO — She may not be a TED Talking Adora Svitak, but she has proved herself to be on a par with child prodigies and accomplished adults. Chloe Reynaldo, 16, is the youngest and the first Filipina chosen by the Texas Christian University (TCU) in Fort Worth, Texas, for the 2016 Global Innovator Awards.

Nominated by Jan Ballard of the Faculty of Graphic Design Department of College of Fine Arts, Chloe visited TCU campus on September 26-30.

According to its website, the Global Innovators program brings groundbreaking individuals from developing countries to the TCU campus to participate in multidisciplinary curricular programs. The program is under the Discovering Global Citizenship endeavor, which is a quality enhancement plan to internationalize TCU.

Previous awardees have been men who excel in cultural, environment and disabilities advocacies. Among its prominent awardees is Gerald Oriol, Jr., Haiti’s Secretary of State for the Integration of Persons with Disabilities.

“Coming to the TCU campus has been a learning experience, which I like to believe was mutual. I’m sure we’ve achieved TCU’s goal of broadening minds of individuals to have a global mindset and outlook,” says Chloe.

A student observes, “It’s awesome that Chloe at such a young age already has such awareness about important issues and it makes me feel better after hearing other girls’ experiences that mine wasn’t isolated.”

Emma Holland, a student, says that Chloe’s background is impressive for such a young age. Chloe’s communication skills and confidence in front of a crowd are both inspirational and encouraging.

Holland also says that graphic designers at TCU will surely use Chloe’s insights as source of empowerment and inspiration. They want to be professional and culturally educated like Chloe.
“The youth can absolutely make a difference in the world, as Chloe advocates. The youth will eventually grow to be the leaders of the world. Our education, awareness, and work ethic, shaped throughout our youth, will determine the success of our generation as leaders,” adds Holland. 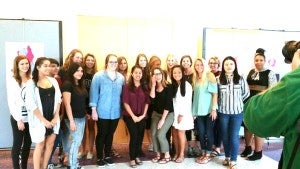 In honor of Chloe, TCU graphic design students conducted a contest where they created images depicting gender equality. The three winners were selected by Chloe and will be used in her international and local efforts.

“We’re proud to be hosting such an extraordinarily impressive young woman,” says Dr. Anne Helmreich, Dean of the TCU College of Fine Arts. “Chloe’s work and accomplishments are certainly representative of the value TCU places on diversity and our mission to prepare students for responsible global citizenship,” a press release quotes Helreich.

A senior student at Regional Science High School for Region VI in Kalibo, Aklan, Chloe is an excellent student, but her activities are not confined to the classroom. Chloe believes that her activism is due to her being a girl. Girls are the most vulnerable in the world population.

“I’ve always considered gender as a sensitive area, which maybe why I was so curious about it, but I believe that precisely because of my position, I can understand its issues best and want more strongly for my advocacy to succeed and be heard,” Chloe says.

Being an awardee means more responsibilities, but the teen is undaunted. Chloe was formally recognized as 2016 Global Innovator on Sept. 30 at TCU. Along with a certificate, she was given a hand-blown glass model of the world, which symbolizes the awardee’s “understanding of how his/her work will transform the future of the planet.” 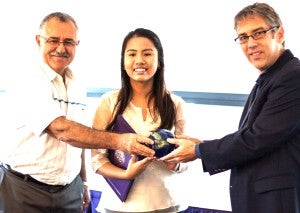 “As the 2016 Global Innovator, Chloe spent time on campus building relationships with the TCU community and designing a project to advance the innovator’s work in her home region. The project will be a young adult publication featuring Chloe’s writing and illustration in ten stories inspired by her youth outreach,” says Ballard.

Summing up her experience as a Global Innovator Awardee, Chloe says: “It has helped me to know and truly appreciate the importance and impact of continuing my advocacy, and the value of focusing on women’s rights. I can honestly say that I have come out a better person for all that I’ve experienced here in TCU. It has instilled in me fresh zeal and anticipation in continuing to advocate for equality, using my voice as a youth, as a girl, and as a Filipina.”

Chloe was chosen by United Nations Asia Pacific (UNAP) the as the youngest delegate and speaker during the Women’s Month Summit held in Bangkok on March 8. She was invited by United Nations Secretary-General Ban Ki-moon to the first-ever World Humanitarian Summit in Istanbul, Turkey last May 23 – 24.

Chloe is currently a member Y-PEER Pilipinas, a youth peer education network initiated by UNFPA. It is a network of youth organizations in the Philippines. Its members include young people, active peer educators, trainers and youth advocates for adolescent sexual and reproductive health.