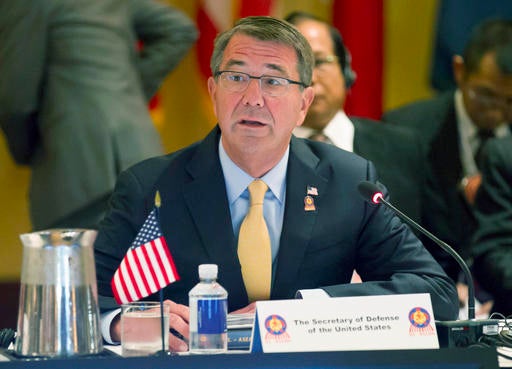 KO OLINA, United States—Pentagon Chief Ashton Carter met Friday with Southeast Asian defense ministers to discuss regional security issues and reassure them America’s “rebalance” to Asia will continue under the next US administration.

The rebalance — or “pivot,” as it is sometimes called — has been a cornerstone of President Barack Obama’s foreign policy, with a shifting of focus away from the Middle East and toward the Asia-Pacific region.

In opening remarks at an informal summit in Hawaii, Carter told defense ministers from the Association of Southeast Asian Nations (Asean) that the United States would reaffirm its commitment to strengthen cooperation on the shared security challenges in the region, including the return of hundreds of jihadists from Iraq and Syria.

“And we’ll make plans to further catalyze the Asia-Pacific’s principled and inclusive security network,” he said.

Key among these is China’s growing reach across the South China Sea.

Carter, who was expected to speak to the press later Friday, has repeatedly stressed that the US military will ignore Beijing’s contentious South China Sea claims, and keep operating in waters and airspace surrounding the islands.

READ: US one with allies in upholding rights over South China Sea—Kerry

“The United States would like to help all our nations see more, share more, and do more to keep Southeast Asia’s vital waterways open and secure,” Carter said.

A senior US defense official, speaking on condition of anonymity, said he was confident America would retain its Asia focus whatever the result of November’s presidential election.

“We’ve got a good thing going,” he said.

“There are a lot of opportunities left over. And we want to make sure that our position in the region is solid for the next president.”

The Pentagon chief was due to meet privately with all 10 defense ministers, including the Philippines’ Delfin Lorenzana.

The dialog comes after Philippine President Rodrigo Duterte this week vowed to end joint military exercises with the United States.

The firebrand leader’s comments were just the latest in a string of attacks against America. He has called Obama a “son of a whore” and extended overtures to China, potentially upsetting a strong US-Philippine alliance dating back more than 60 years.

Duterte won elections in May in a landslide after a campaign dominated by his pledge to eradicate drugs in society by killing tens of thousands of people.

On Friday, he drew parallels between his campaign to wipe out the drug problem and Adolf Hitler’s genocidal drive, saying he’d be “happy” to slaughter millions of drug addicts.