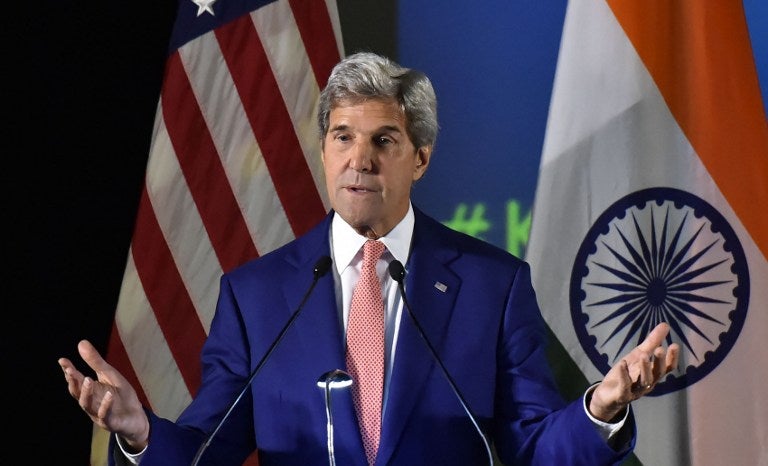 US Secretary of State John F. Kerry gestures as he addresses a gathering at The Indian Institute of Technology in New Delhi on August 31, 2016. Secretary of State John Kerry said that the US was united with its allies in upholding freedom of navigation rights in the South China Sea following a tribunal’s decision on the contested waters. AFP

The United States is united with its allies in upholding freedom of navigation rights in the South China Sea following a tribunal’s decision on the contested waters, Secretary of State John Kerry said Wednesday.

Speaking on a visit to New Delhi, Kerry called on China and the Philippines to abide by the arbitration tribunal’s recent decision, saying “there is no military solution” to the dispute.

Kerry said the United States itself had no claim over the waters, that are crucial to international shipping, but would stand up for freedom of navigation rights.

“We have made it clear that we will stand up for our rights and we will stand with our allies,” he said, referring to navigation and the rule of law.

“US and other countries are united in an alliance that respects freedom of navigation, the norms and standards of the laws of sea and rule of law with respect to access to the high seas,” he said while speaking to engineering students at a college in Delhi.

Beijing claims almost all of the South China Sea despite partial counter-claims from the Philippines, Vietnam, Malaysia and Taiwan. In recent months it has built massive structures including radar systems and an airstrip over reefs and outcrops.

But the UN-backed tribunal, ruling on a case brought by the Philippines, found last month there was no legal basis for China’s claims.

The US has said it will continue naval patrols near reefs and outcrops claimed by China to assert the principle of freedom of navigation, a move which has angered Beijing.

“The US continues to call upon China and Philippines to abide by the tribunal’s decision. It’s final and legally binding on both parties,” Kerry said.

The comments come ahead of the G20 leaders’ meeting in China starting on Sunday that could see tensions over territorial disputes.

Kerry is due to hold talks later Wednesday with Indian Prime Minister Narendra Modi as the two nations forge closer trade and security ties, in part to check concerns over China’s growing assertiveness in the region.

Peace the only way to go, Rody tells China envoy

China will be the loser–Yasay

Read Next
Chinese nabbed over stolen credit cards, skimming and access gadgets at NAIA
EDITORS' PICK
SMDC The Good Guys on the Go
WHO resumes hydroxychloroquine coronavirus trials
COOCAA TV Bounce Back Sale offers up to 50% off
Cherry Mobile teams up with Cloud Panda PH, launches online store
Over P785M distributed to 98K PUV drivers in Metro Manila — DSWD
DOLE eyeing P20-B subsidy for MSMEs
MOST READ
Piolo gets first call slip from ABS-CBN to resume ‘ASAP’ taping
It’s final: Anti-Terror Bill now only needs Duterte’s signature
‘She had no right to be in Singapore’: Youth pleads guilty to abusing Filipino maid
Cop in Floyd death got medals for valor and drew complaints
Don't miss out on the latest news and information.