Duterte out to end war games with US 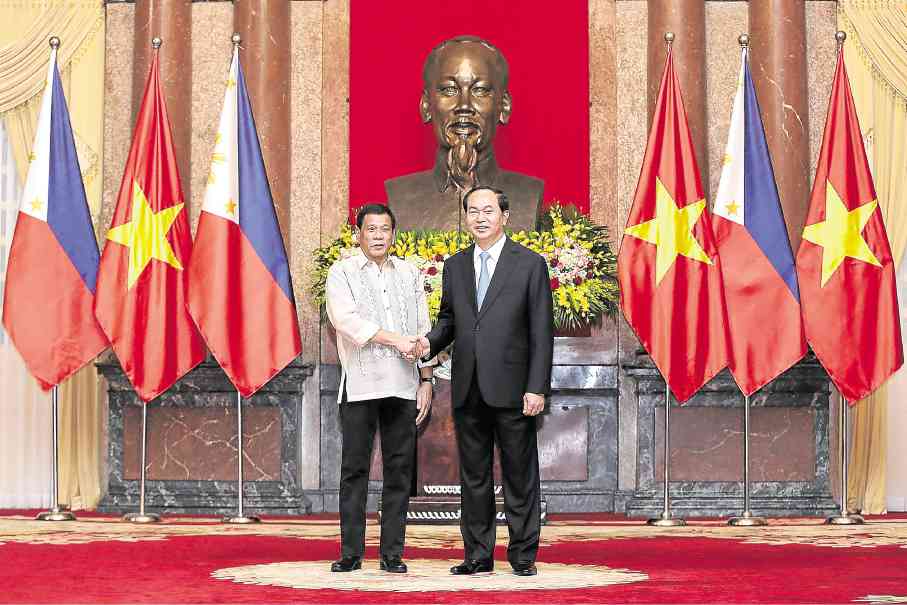 OFFICIAL VISIT President Duterte meets with Vietnamese President Tran Dai Quang at the Presidential Palace in Hanoi. The Philippine leader, who is on a two-day official visit to Vietnam, announced that next month’s US-Philippine military exercises would be the last and that there would be no joint navy patrols in the South China Sea. AFP

HANOI—President Duterte on Wednesday plunged one of the United States’ most important Asian alliances deeper into uncertainty by declaring next month’s US-Philippine military exercises “the last,” and ruling out joint navy patrols in the heavily disputed South China Sea.

Addressing the Filipino community here after arriving for a two-day official visit to Vietnam, Mr. Duterte said he was “serving notice to the Americans.”

“You are scheduled to hold war games, which China does not want. I will serve notice to you now that this will be the last military exercise,” he said.

Mr. Duterte pledged to honor a longstanding defense treaty with the United States, but said China opposed joint marine drills in the Philippines, which would start next week, and there would be no more war games with Washington after that.

“I will maintain the military alliance, the RP-US pact which our countries signed in the early ’50s. But I will establish new alliances for trade and commerce,” he said.

He also spoke about his plans to visit China and Russia “to open all doors of investment.”

Mr. Duterte’s remarks gave one of the strongest signs yet of fissures in a historic alliance that Washington has relied upon as it tries to cement its influence in Asia to counterbalance China’s rapid rise.

The US state department spokesperson, John Kirby, said he was not aware of any official notification from the Philippines about ending joint military exercises.

“Our focus is on the relationship today and moving it forward,” Kirby told a regular news briefing in Washington. “We continue to believe that that’s possible … . [W]e have significant security commitments with the Philippines. We’re committed to meeting those commitments and to furthering this relationship.”

The US Embassy in Manila said on Thursday that US-Philippine relations were “business as usual” until it receives official notice about Mr. Duterte’s foreign policy.

“We have not received any official communication from the [Philippine] government,” the embassy’s spokesperson, Molly Koscina, said in a text message to the Inquirer.

Koscina said the US side was expecting the marine drills to start next week as scheduled, noting this would be the 34th year the two allies would be undertaking the military exercises.

“The US government has not received any official communication on those statements so we continue to focus on the breadth of our relationship with the Philippines. It really is an amazing, longstanding relationship so we continue to do business as usual,” she told Inquirer editors during a visit to the newspaper’s offices on Wednesday.

National Security Adviser Hermogenes Esperon Jr., who was traveling with Mr. Duterte,  said on Wednesday that the President was referring to next week’s amphibious landing drills.

“You just heard the President. I cannot clarify. The way I understand it, it’s the last for the year. We will clarify,” Esperon told a scrum of reporters in Hanoi.

‘I did not hear that’

But Foreign Secretary Perfecto Yasay, who was also part of Mr. Duterte’s entourage, said he did not hear the President say he was putting an end to military exercises between the Philippines and the United States.

“No, no, no, no. I have not heard that so I cannot make any comment on that. I do not believe that he said that,” said Yasay, who sat on the stage as Mr. Duterte spoke.

The Philippine-US Amphibious Landing Exercises (Phiblex) are set to take place from Oct. 4 to 12 in the Philippines, which follow the larger annual Balikatan exercises in April involving more than 8,000 forces from both sides.

Military officials from both countries have also started preparing for a new set of exercises next year.

In a press briefing on Thursday, Yasay said Mr. Duterte’s remarks did not mean the cancellation of any agreement or treaty with the United States.

“It only means that when the Mutual Defense Board in the future will make that recommendation, he will most likely on the basis of what he said now, probably will not allow joint military exercises,” Yasay said.

Clarifying his statement on Wednesday, he said he might have been “too sleepy” because of jet lag, but maintained that he did not hear Mr. Duterte say he was ending joint military exercises with the United States.

On Wednesday, Yasay said Mr. Duterte promised to respect all existing treaties and commitments with the United States.

Besides the PH-US Mutual Defense Treaty, the Philippines has a Visiting Forces Agreement (VFA) and an Enhanced Defense Cooperation Agreement with the United States.

Yasay said the VFA, under which the joint military exercises are held, would continue even beyond Mr. Duterte’s six-year term, and that the cessation of any agreement would have to be decided mutually by the two countries.

“He cannot abrogate the treaty. He said he would respect it,” Yasay said.

The only thing Mr. Duterte had ruled out were joint patrols beyond the Philippines’ 22-kilometer territorial waters, he said.

Briefing reporters in Manila on Thursday, presidential spokesperson Ernesto Abella said Mr. Duterte was leaning toward an “inclusive” foreign policy, by reaching out to and strengthening relations with more countries and not just with the United States.

Abella said Mr. Duterte had vowed to honor the Philippines’ agreements with the United States.

“However, there are also certain modifications in their relationship and the relationship remains solid according to the agreements. But also there will be other activities that will be more open to other nations, too,” he said.

Abella said there was no definite date yet for the last war games between the Philippines and the United States.

He said the foreign policy shift that Mr. Duterte wanted was not “unfortunate,” as former Foreign Secretary Albert del Rosario had described it, but was “part of the process which the President sees as setting . . . our own independent course.”

The shift may be “difficult and challenging,” he said, but the President sees it as something that will “add to our well-being and prosperity as a nation.”

What Mr. Duterte was saying, he said, was that at this stage, the Philippines was moving from its “exclusive relationship” with the United States and going into “a more open relationship with others.”

In his speech to the Filipinos here, Mr. Duterte said he would not allow the Philippine Navy and the Philippine Coast Guard to join joint patrols with the United States because they risked dragging the Philippines into conflict with China.

“I’m not ready to commit the soldiers of this country just to be massacred, and besides, besides—son of a bitch—the battleground is Palawan. Oh, no. Let’s bring it to San Francisco, that’s fine with me. Or China, you choose,” he said, drawing laughter from his audience.

“But if we quarrel and you make the Philippines a battleground, oh, no, I’ll expel you, including America. You get out,” he said.

In July, the UN-backed Permanent Court of Arbitration in The Hague, ruling in an action brought by the Philippines, found that China’s claim to nearly all of the South China Sea had no basis in international law, and that Beijing had violated Manila’s sovereign rights by preventing it from fishing and exploring for resources in waters within its 370-km exclusive economic zone (EEZ).

Beijing has rejected the ruling, and Mr. Duterte has said he prefers bilateral talks with China to resolve the dispute.

Asked if the cessation of joint military drills with the United States was a condition set by China for talks on the dispute and improvement of relations, Esperon said, “I don’t think so.”

He said, however, that the Philippines would demilitarize the West Philippine Sea, a reference to waters in the South China Sea within the Philippines’ EEZ. He gave no details, though.

Mr. Duterte’s latest comments add to uncertainty about what his end game is and whether Manila’s next moves could complicate regional diplomacy or alter the status quo in the South China Sea.

“If the joint patrols stop, will this have any sort of major impact on the situation in the South China Sea? Most likely not,” the official said, speaking on condition of anonymity.

He added that, in a sign things were continuing as usual, the landing ship USS Germantown would be making a port call in Manila from Wednesday.

“The US-Philippines relationship might become strained and even shaken,” Jacobson said.

“The US geopolitical stake in the region are much too high to react to his hyperbole. The current attitude in Washington is mature—more of patience than feeling provoked,” he said.

He and his entourage met first with Prime Minister Nguyen Xuan Phuc at the premier’s office then with Nguyen Phu Trong, general secretary of the central committee of the Communist Party of Vietnam.

The hosts threw a state banquet in honor of Mr. Duterte at the International Convention Center in Hanoi.

Mr. Duterte was expected to leave Hanoi on Thursday night, arriving in Davao City early on Friday. With reports from Juliet Labog-Javellana and Christine O. Avendaño in Manila and the wires