Filipinos in Vietnam swarm around Duterte for selfies | Global News

Filipinos in Vietnam swarm around Duterte for selfies 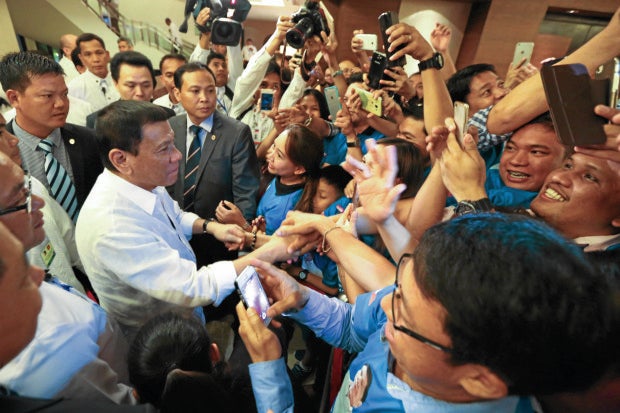 MOBBED President Duterte is warmly received by Filipinos working in Vietnam at the Intercontinental Hotel in Hanoi during his visit to that country on Wednesday. MALACAÑANG PHOTO

HANOI—They patiently waited for more than four hours, not complaining about or minding their hunger. A picture with their idol was all they needed to make up for the long wait.

As always, President Duterte arrived late but regaled the more than 600 Filipino professionals based in Vietnam with his off-beat humor and colorful language.

In an hourlong speech at the Intercontinental Hotel here, Mr. Duterte discussed his favorite topics—Sen. Leila de Lima and the critics of his brutal war on drugs, including the United States, the United Nations and the European Union.

Mr. Duterte estimated that there are 3.7 million drug addicts in the Philippines, and that the narcotics trade in the country nets P216 billion a year.

He said he would compromise the next generation of Filipinos if he failed to stamp out illegal drugs.

He mentioned his “narcolists” which contain the names of government officials, police and military officers whom he has accused of coddling and protecting drug lords.

More than 3,700 people have been killed by police and unknown assailants since the President launched his campaign against drugs upon taking office on June 30.

“I intend to kill more because I have to account for these 4 million. I will not leave the presidency in shame. Better that I be the one jailed. I’ll kill them all,” Mr. Duterte said.

He slammed his critics for threatening to take him to international courts for genocide.

“Genocide when you kill the Jews or one tribe, one sect or belonging to the same religion or race. What genocide? I’ll kill these sons of bitches. Doing nothing but destroy my country,” he said.

Addressing the foreigners in his audience, Mr. Duterte maintained that it was not unlawful to threaten criminals in the Philippines.

He called the European Union “stupid” for criticizing him, and challenged it to show him the Philippine law that makes him liable for threatening criminals.

“If I cannot be held liable in my country, why are you fucking with me? Why imprison me with the laws of another country? You must be crazy,” he said.

“It is my country. If you have nothing else to do, do not fuck with me,” he added.

He went on to slam De Lima, whom he had publicly linked to illegal drugs.

“With the entry of De Lima, elected by drug money from  Muntinlupa (New Bilibid Prison), the portals of the national level of narcopolitics was opened,” he said.

He said the Philippines would not have learned the extent of the drug problem if he had not been elected President, adding that he himself was “horrified” upon learning the real situation.

He promised to press his relentless campaign against illegal drugs, and that he “will not count the dead bodies.”

“In this fight, for my country, I put at stake on the table my honor, my life and even the presidency. If they decide to impeach me, fine, but solve the problem,” he said, drawing loud applause from his audience.

Mr. Duterte said retired “narcogeneral” Marcelo Garbo Jr. was inside New Bilibid Prison (NBP) when De Lima led a raid on the national penitentiary in December 2014, when she was the justice secretary.

He said NBP then had a nightclub, with women free to enter and leave, plus free-flowing liquor.

“What’s your problem? Why be afraid to go to prison? Anyway, you’re enjoying the life of a free man? That is how corrupt the Philippines was,” he said.

Mr. Duterte stressed the need to rebuild the Philippines, as the country has been left behind and its people leave to find jobs in other countries.

He promised the Filipinos in Vietnam that there will be changes when they go home, in particular, no more harassment when they pass through immigration and customs at the airports.

“Just let me know. No need to give me your name. Just tell me who is the son of a bitch in that office and I will take care of him,” he said.

“I’m telling everybody, every meeting in the Cabinet: This will be a clean government. Let us give the Filipino a respite from the agony and suffering,” the President said.