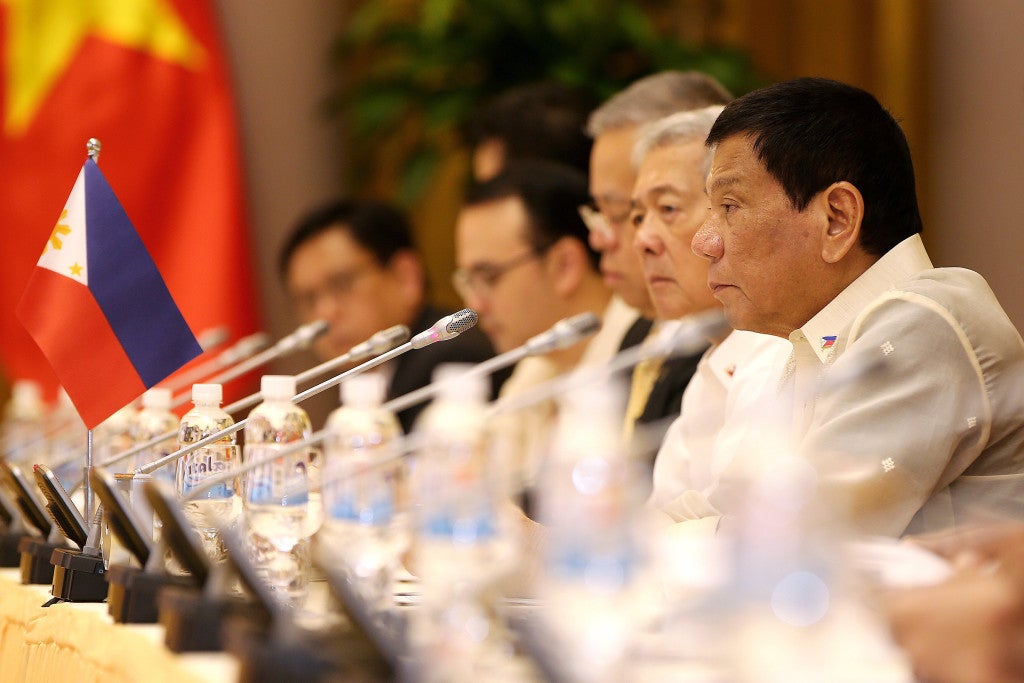 Groups opposing US presence in the country lauded on Thursday President Rodrigo Duterte’s decision to skip or possibly scrap the war games.

“We welcome the most recent pronouncements of President Rodrigo Duterte stating that the upcoming US-RP war games (PHIBLEX) will be the last under his term. The move is timely and consistent with his avowed independent foreign policy. It’s about time,” Bagong Alyansang Makabayan (Bayan) said in a statement.

During his visit to Vietnam, Duterte said this year’s military exercises with the US will be the last but some of his officials claimed that it only referred to this year’s exercises.

The group said Duterte was “correct in opposing US intervention” in the disputed West Philippine Sea.

It said the US is only using the event to “project US military might in the region.”

“The war games do not help, and in fact complicate, our claims in the West PH Sea. The war games are an affront to our sovereignty,” it said.

Instead, Bayan said the Philippines should “avail of the favorable ruling and deal with China, without interference by the US.”

The group argued that the joint military exercises with the US has failed to help modernize the Armed Forces of the Philippines (AFP).

“Our AFP remains backward even after more than a decade of US military exercises,” it said.

“Opposing US intervention does not make us pro-China. On the contrary, asserting our sovereignty and independence from the US strengthens our position in dealing with China,” Bayan said.

It urged Duterte to “remain steadfast in his assertion of an independent foreign policy.”

“This is an unprecedented assertion of sovereignty that shows Pres. Duterte’s seriousness in pursuing an independent foreign policy as enshrined in the Constitution,” the group said.

It said the Philippines was only “freed of US troops” for a brief period (since the US colonization of the country in 1902) after the US military bases were removed in 1992.

“This and future acts of independence and sovereignty will earn for us the respect of other nations as we depart from our traditional role as America’s surrogate state in Southeast Asia,” P1NAS said. “This will open up a whole new world of diplomatic, economic, cultural and security relations with other countries that also value their sovereignty and independence.”

The group said the Filipino people should rally behind Duterte.

“It seems that for the first time in so many decades, we have a president who is brave and bold enough to stand up to the global powers. We hope that Pres. Duterte will go further in upholding national sovereignty and the national interest over that of the US or China,” it said. RAM/rga