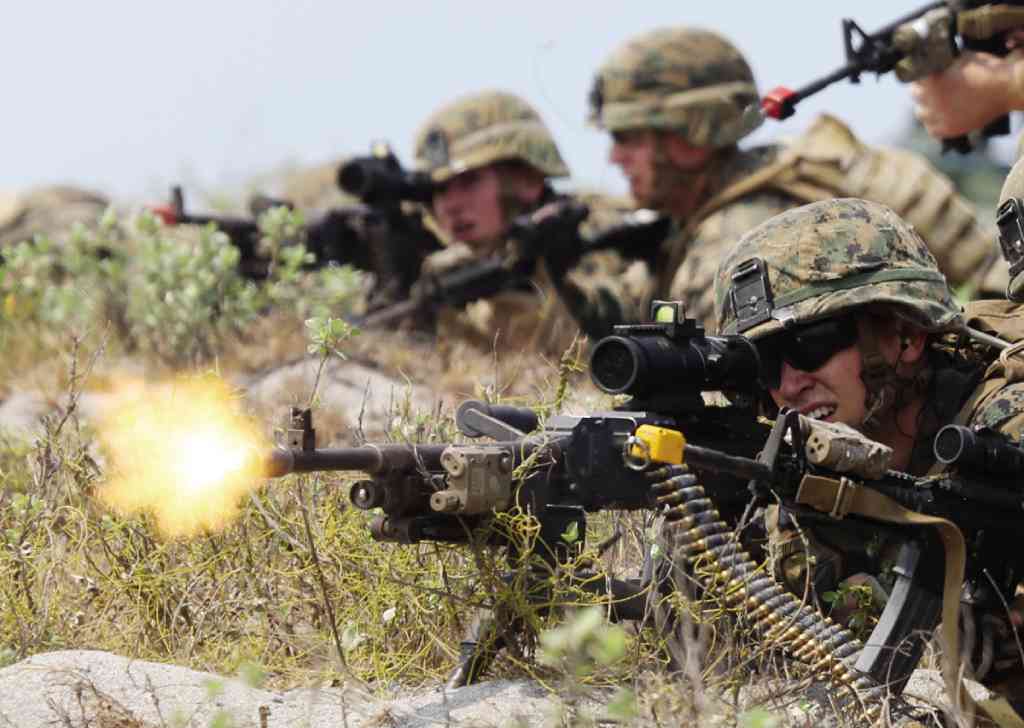 A US Marine fires a machine gun during an amphibious landing exercise in San Antonio, Zambales, as part of the annual Philippine-US joint military maneuvers. Hermogenes Esperon Jr., the national security adviser of President Rodrigo Duterte, tried to clarify a statement of the Chief Executive who said there would be no more military exercises with the US. Esperon said he believed that it only meant for ‘this year.’ INQUIRER FILE / NIÑO JESUS ORBETA

HANOI, Vietnam — He did not mean that there would be no more war games at all with the United States.

This was the stance of President Duterte’s trusted men when asked to clarify the President’s statement that he would be ending joint military exercises with the U.S., its number one ally.

While one Cabinet secretary said Duterte was referring to a joint exercise scheduled in October as the last for this year, another claimed not to have heard Duterte made the declaration.

“You just heard the President. I cannot clarify. The way I understand it, it’s the last for the year. We will clarify,” said national security adviser Hermogenes Esperon Jr. in an interview with reporters.

Esperon was referring to the 33rd iteration of the Amphibious Landing Exercise (Phiblex) to be held from October 4 to 12 between Filipino and American soldiers.

Minutes later, foreign affairs secretary Perfecto Yasay Jr. was asked to clarify the President’s statement, only to reply: “No, no, no, no. I have not heard that so I cannot make any comment on that. I do not believe that he said that.”

On Wednesday night, Duterte said that he would be putting an end to the joint war games with the U.S., the country’s number one ally with which it has a 65-year-old mutual defense treaty.

The President made the declaration in an hour-long, profanity-laced speech before more than 600 overseas Filipino workers in Hanoi during the first day of his official visit here.

He said he would maintain military alliances with the U.S. because of the 1951 Mutual Defense treaty.

However, “I will establish new alliances for trade and commerce and you are scheduled to hold war games again, which China does not want,” Duterte pointed out.

“I would serve notice to you now that this will be the last military exercise. Jointly, Philippines – US, the last one. Ayaw ko lang mapahiya si Defense Secretary ko,” Duterte said.

The President made the declaration after announcing that he would visit China and Russia to “open the doors of investment.”

It may be recalled that last month, Duterte announced that he wanted U.S. special forces troops to pull out of Mindanao as their presence might complicate military offensives against the Abu Sayyaf.

In his speech, Duterte reiterated that he would not join any naval patrols in the South China Sea, even referring to Philippine Navy vessels as gray ships and white ships as belonging to the Philippine Coast Guard.

“War ships, they call it the gray ship. There will never be an occasion that I will send the gray ships there. Not because I am afraid,” Duterte said.

The Philippines has a long-standing territorial dispute with China over the South China Sea and even won in its arbitration case against China before an international court.

The Duterte administration however is trying to establish better relations with China, mellowing down from the hardline stance adopted by its predecessor, the Aquino administration.

Aside from the Mutual Defense Treaty, the Philippines has a Visiting Forces Agreement with the U.S. which paved for increased military cooperation with the American military.

Under the Aquino administration, the Enhanced Defense Cooperation Agreement was signed, giving the U.S. troops access to military facilities at the invitation of the Philippine government.

The two countries conduct the annual Balikatan exercise to improve interoperability between the two forces, and also to conduct civic and humanitarian assistance projects.

Asked if the cessation of joint military exercises with the U.S. was a condition of China in the talks over the South China Sea dispute, Esperon said: “I don’t think so.”
He noted that the Philippines would be demilitarizing the West Philippine Sea.

Yasay, for his part, stressed that Duterte promised to respect all the existing treaties and commitments with the U.S.

He noted that the VFA would continue even beyond the President’s six-year term, and that cessation of any agreement would have to be decided upon mutually by both the Philippines and the U.S.

“He cannot abrogate the treaty, he said he will respect it,” Yasay said.

“I am not able to explain that because I did not hear it. You might have to ask the President himself,” when asked to clarify the statement on ending war games with American troops.

He added: “Quite frankly I did not hear that, I’m only saying it on the basis of what I heard.”

Yasay claimed that the President was talking in the context of not allowing the Philippines to engage in joint patrols in the South China Sea outside of the country’s territorial jurisdiction.

“He has been repeating this all along, he has always been consistent about this. He was only criticized about this. He was not going to allow the Philippine Navy war ships or any of our military personnel to engage in joint patrols,” he said.

The foreign affairs secretary even made an appeal to reporters seeking a clarification of Duterte’s statements.