No Fil-Am plot to oust Duterte 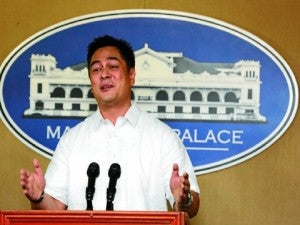 Communications Secretary Martin Andanar claimed there was a plot by Filipino Americans to oust Pres. Duterte by January 1917. RADYO INQUIRER

It began with a radio interview on Manila radio station DZRH on September 19, 2016 when Pres. Duterte’s Communications Secretary Martin Andanar announced the breaking news that Filipino Americans in New York were planning a coup against Pres. Duterte in January of 2017.

“I was just talking to somebody in New York now who is also a member of the Cabinet – I won’t mention his name. But he also heard of the Fil-Ams in New York who are planning. They are hatching a plan to oust the President by January 2017. There is this kind of report,” he said.

“It’s really about the evidence that you have, isn’t it? (If there is) you let me know (because) it is the concern for the government and it should be a concern for the nation because it’s a destabilization talk,” Andanar said he told the official.

Andanar never identified the cabinet official he said he spoke with, but there were only two cabinet officials who were in New York in that time period — Department of Foreign Affairs Secretary Perfecto Yasay, Jr. and Presidential Spokesman Ernesto Abella.

When he spoke at a Town Hall meeting with the Filipino-American community at the Philippine Consulate in New York on Wednesday, Sept. 21, Yasay was asked if he can confirm what Andanar reported.

Yasay replied: “I do not know whether those reports are true, I deny having said those things and I am sure Sec. Ernie Abella would not say those things,” he said.

So the question is not whether Yasay or Abella have any evidence of the plot, which Andanar announced in his radio interview, but whether Andanar has any evidence that “a member of the cabinet” actually provided the information to him. Or did Andanar just make it up as a joke?

Unless reading a teleprompter as an anchorman qualifies one as a newsman, it does not appear that Andanar has the journalism credentials to even understand what hearsay means. He said he asked the unnamed official to present him with evidence that he heard that Filipino-Americans in New York were talking about ousting Duterte. He then said that if the official could not present him with evidence of what he said he heard, then it would just be hearsay. Huh? 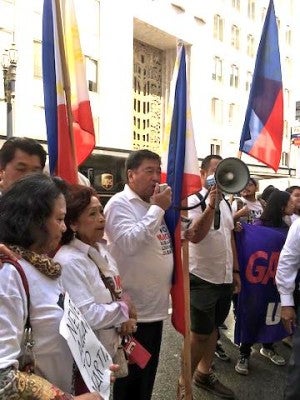 But Secretary Yasay will not provide him with any evidence because he denied even talking to Andanar about this issue. The lack of any evidence of this “plot” did not stop Andanar from further inflaming the issue in subsequent press conferences.

Two days after the radio interview, Andanar announced from Malacanang Palace that the administration has already identified the people behind the supposed plot of Filipino Americans. “We have names. We know who you are,” he said.

“We are aware of this and we have names, I’ve received names, but I’m not going to mention it because, you know, I was also a journalist and we might be charged with libel,” Andanar said in a press briefing Tuesday.

According to the news reports, Andanar declined to provide any clue on the identities of the people who are allegedly plotting Duterte’s ouster. He claimed, however, that the information was provided by “credible sources.”

The difference between Martin Andanar and Hitler’s Minister of Propaganda Josef Goebbels is that the latter never claimed to be a “former journalist.” Goebbels famously said, “It is the absolute right of the State to supervise the formation of public opinion.”

It was Goebbels’ boss who famously said: “If you tell a big enough lie and tell it frequently enough, it will be believed.”

One day after Secretary Yasay denied talking to Andanar and expressed skepticism that the other cabinet official in New York, Sec. Petilla, had talked to him; Andanar was undeterred. “We have to confirm, we have to vet, but whatever they’re planning, just think twice because it is not lawful when you bring down a government. And rest assured that we will protect our president,” he said. 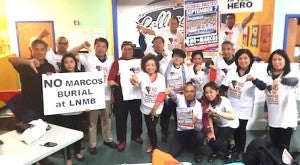 Andanar has used reports about a conversation that was denied by the source he used to launch a witch hunt against an imagined plot of Filipino-Americans who are critical of the Duterte administration because of its sordid record of extrajudicial killings.

Andanar is working with Duterte supporters in the U.S. to compile a list of Filipino-American critics so they will “think twice” about participating in any anti-Duterte demonstrations opposing extrajudicial killings.

But perhaps there were conversations by Filipino Americans in New York and other parts of the U.S. about asking Pres. Duterte to resign.

On September 8, 2016, Balitang America aired an interview with Filipino American human rights lawyer Ted Laguatan where he criticized Pres. Duterte for damaging the good relations of the Philippines with the US. “I’m sorry for him that he cannot control his mouth and his brain because it gives us a bad image as a nation. It is unfitting because he is seen speaking like that against the world, against the leader of the United States, against Filipino interest. There’s only one solution. He should resign,” he said.

The following week, on September 13, at a national teleconference of the U.S. Pinoys for Good Governance (USP4GG), led by Loida Nicolas-Lewis from New York, members discussed Laguatan’s call for Duterte to resign. While there was support for the sentiment, there was also concern that it was not yet time for it and that it would only be used by Duterte supporters to attack the credibility of his critics.

There was also a suggestion for US Pinoys to write a letter to Pres. Duterte to ask him to tone down his language and his attacks on the US, an ally supporting the Philippines claim to the West Philippine Sea.

In the end, US Pinoys for Good Governance voted unanimously to support a resolution to buy a jet ski and donate it to Pres. Duterte to help him fulfill his campaign pledge to jet ski to the Scarborough Shoal to plant a Philippine flag on it in defiance of China’s efforts to transform it into an island fortress. 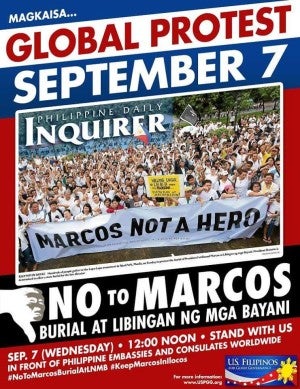 It is quite possible that someone heard about this teleconference and about discussions calling for Duterte to resign and passed the word out to some unnamed cabinet official in New York who may have passed it on to Andanar. As anyone familiar with the perils of how a “broken telephone” works, the retelling of the conversion escalated the original call for Duterte to resign, to a call to impeach him, to a call to mount a coup to oust him.

The remaining mystery is the date. According to Andanar, the “Fil Ams from New York” are planning to stage their coup in January of 2017. As one who participated in that September 13 teleconference, I can confirm that no one mentioned a date for Pres. Duterte to resign.

But I think I know the source of the date Andanar is referring to. January of 2017 is six months after Pres. Duterte assumed office. In his campaign speeches, candidate Duterte repeatedly promised to resign if he is not able to solve the problems of crime and drugs in his first six months in office.

As Interaksyon reported on January 20, 2016, Duterte said: “I will not ask for a (full) term…I ask for three to six months and I will finish them,” said Duterte, referring to criminals, drug lords, and corrupt public officials, during a symposium in Manila at the De La Salle University.

Duterte assumed the presidency on June 30, 2016. Duterte’s self-imposed six-month term will expire on December 30, 2016. So on January 1, 2017, Duterte will resign. This is not according to Fil-Ams in New York, as Andanar alleges. This is according to Pres. Duterte himself.