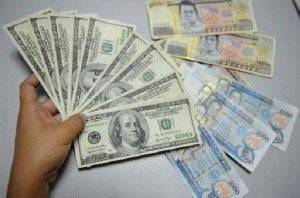 Bank of the Philippine Islands associate economist Nicholas Antonio T. Mapa noted that the peso-dollar pair was trading higher in the morning session, averaging at 48.265:$1, as “sustained foreign outflows which weighed on the Philippine Stock Exchange (down 0.98 percent) dragged on the peso as well, while corporate demand, given the timing of the end-month, exacerbated the peso’s weakness.”

“Towards the end of the session, traders booked gains from long-US dollar positions while some dealers remained wary of BSP’s possible presence in the foreign exchange market to smooth out the depreciation trend and weed out speculative trades,” Mapa added.

“We see that the country’s strong macroeconomic fundamentals have never changed, they have remained stable and robust. But because of perceived risks which may not really be justified and continuing uncertainty about the unknown  in the calculus of forex traders, they have embraced negative sentiment rather than focus on fundamentals. Not even the real interest rate differentials which are rather manageable could justify the sharp fall of the peso except the negative perception of the market,” Guinigundo said in a text message to reporters late Monday.

On the other hand, Budget Secretary Benjamin E. Diokno told reporters on the sidelines of the Makati Business Club’s annual meeting Tuesday that he was not worried about the peso’s decline against the greenback, and was “comfortable” with the present forex level.

“If you compare the depreciation of the peso relative to other currencies, it’s really not that bad. The weakening of the peso is the reflection of the strengthening of the dollar. And that is because of the possible [rate] adjustment of the Fed,” Diokno said.

Also, Diokno noted that “the real winners here in the peso depreciation are overseas Filipino workers’ (OFW) remittances, the families of OFWs and the exporters” who get more peso value for their dollars.

“And, of course, the losers were those fond of imported goods,” Diokno pointed out.

In a speech at the Philippine Investment Conference also on Tuesday, Monetary Board member Valentin A. Araneta said he thought that “rising interest rates in the US would be a good sign at this stage because it confirms that the world’s biggest economy and a major trading partner of the Philippines is robust and that by raising the interest rates it means that the monetary authorities are confident of achieving their inflation targets.”

“It also means increases in investment, output, revenues, employment and imports of goods and services from its trading partners. However, we know that adjustment shocks will have to be absorbed because of the huge amount of fickle portfolio capital sloshing around the global financial markets searching for yield, which will go back to the US markets if and when the interest rates there go up,” Valentin further explained.

In the case of the Philippines, Valentin said the economy has displayed “strong fundamentals that position it well to weather stresses emanating from policy adjustments among its trading partners.”

“The opportunities for growth and development are there beneath the noise. Look at the long term trend line amidst the diverging cyclical movements and even any black swan events. Secular growth as against the cyclical. Remember that we have enjoyed real growth even during the nadir of the great recession of 2008-2009,” Valentin noted.

For the rest of the week, Metrobank Research sees the peso trading within the 47-48.5:$1 range, “with the BSP present to smoothen volatility.”

“The peso continues to underperform despite the Fed not hiking rates this month and releasing a dovish dot plot. Some exhaustion is beginning to surface however, as US dollar-peso pair has been stalling ahead of 48:$1, with the offshore premium dwindling as well. Agent banks continue to intervene on top, but it is yet to be seen if they will be firm at the current year’s high of 48:$1. Corporate demand is expected to continue this week,” Metrobank Research said in a note to clients.  SFM