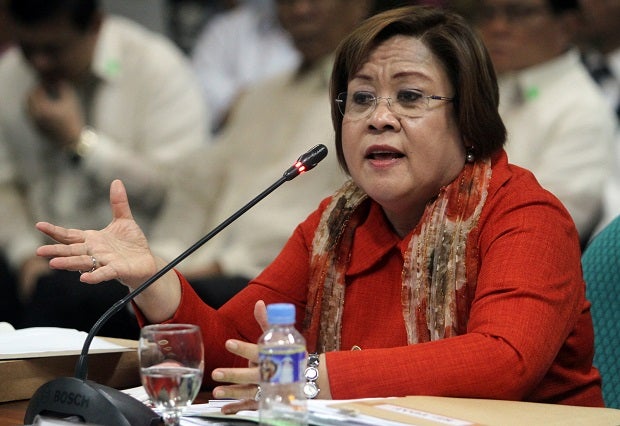 In a statement, De Lima, among the fiercest critics of the anti-drug campaign, likened the parameters to “censorship and control.”

“While it is within the prerogatives of the Philippine government as the host country, through the DFA, to set reasonable parameters for the visit of the UN special rapporteurs and other UN probers, I find questionable the announced rule that it is the government that will decide the places to be visited and the persons to be interviewed by these probers,” De Lima said in a text message.

Duterte had invited the UN, the European Union and, most recently, United States President Barack Obama to come to the country and investigate the slays.

The deaths have exceeded 3,000, but police and Malacañang officials have repeatedly explained that not all the deaths could be attributed to stepped up anti-drug operations.

In remarks in General Santos City on Friday, Mr. Duterte explained that extrajudicial slays were not a state policy, and that his orders were for the police to kill any suspect who would present “violent resistance,” and only if they needed to defend themselves.

On the same day, the DFA laid down its parameters for international investigators, including “the list of people to be interviewed and places to be visited.”

DFA spokesperson Charles Jose said international organizations such as the UN and the EU “need to agree to the protocols and parameters that we will set before they are allowed to visit the country,” explaining that certain restrictions were for safety reasons.

De Lima, however, felt the parameters were contrary to the spirit of the invitation.

“What is the sense of inviting independent probers if they are not going to be allowed freedom of movement and action, and are going to be dictated upon on the extent of their visits and sources of information?,” she said.

“Under any standards, an investigation under such constraints can no longer be deemed independent. Protocol does not mean censorship and control over the ability of the UN team to conduct an independent, credible and exhaustive probe,” the senator added.

Earlier this week, De Lima filed a resolution seeking Senate action to prod the administration to welcome a UN probe. This after she was removed as chair of the Senate committee on justice and human rights in the middle of an inquiry into the drug deaths.