Fr. Tritz: He served the last, the least, the lost 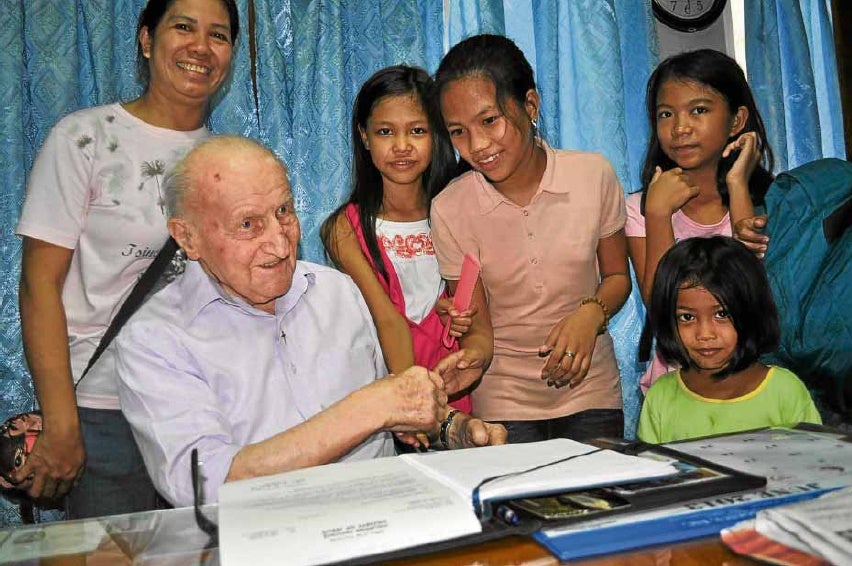 FATHER TRITZ and the underprivileged: A living reminder of the Christian and Jesuit vocation to take care of those left behind by society.
CONTRIBUTED PHOTO

Nine days after Fr. Pierre Tritz, SJ, passed away on Sept. 10, a memorandum of agreement was signed between Erda Tech Foundation and First Philippine Industrial Park (FPIP), represented by its founder and chair emeritus, Oscar M. Lopez.  Father Tritz was scheduled to be present at the signing of the agreement that would turn 5 hectares of land in Sto. Tomas, Batangas province, into the future home of Tech-Voc Senior High School, but the Lord had already called him home.

The senior high school that now bears the name of Father Tritz will, however, continue the legacy of this priest who was born in France in 1914, but aspired to be a missionary in China as a 19-year-old Jesuit.

After three years of basic formation, the priest was granted  his request and he arrived in China to continue his Jesuit formation that included four years of handling sports and discipline at Tsinku University in Tianjin. He had a long period of formation, probably due to the need to study Mandarin and the Sino-Japanese War that raged from 1937 to 1945.

Father Tritz was ordained when he was 33 at Xujiahui Cathedral in Shanghai in June 1947, 14 years after he entered the Society of Jesus.

Just as Jesus Christ was crucified at the age of 33, Father Tritz similarly suffered a crucifixion when he began his priestly ministry and died to himself daily. The details of his life in the Philippines are well-known: he arrived in 1950; became minister and resident at Chabanel Hall, the language school of exiled Jesuits; taught at University of the East, Far Eastern University and Araneta University where he was also chaplain; took graduate studies in psychology; taught at Ateneo de Manila; chaplaincy at St. Joseph’s Hospital and Hospital of the Infant Jesus, where he lived from 1979 until his death, and started the work that had become most identified with him: Erda.

In the early 1970s, alarmed by the high dropout rate in public schools, Father Tritz and his good friend Betty Reyes started supporting six students at Juan Luna Elementary School. The kids were given school supplies and uniforms so their families would have no reason to stop their schooling.

In 1974, Erda—which stands for Educational Research and Development Assistance—was formally established and began supporting 200 children in public schools. To date, more than 800,000 children have benefited from the work of Erda.

In 1994, long before K-12 and the government incorporated technical and vocational training as an option in high school education, Father Tritz boldly established a 5-year technical high school in Pandacan, borrowing land from the Philippine National Bank, asking DMCI to construct the buildings, and marshaling individuals and groups to sponsor students and cover their school expenses.

Today, Erda Tech is known as Fr. Pierre Tritz Institute, an honor bestowed on him by the Erda Board on his 100th birthday two years ago. To date, the school counts 1,628 graduates, many of them now gainfully employed in technical industries.

To preserve Father Tritz’s legacy, Xavier School took over management of Erda Tech in 2009. The Erda Board was also reorganized to oversee the other works of the Erda Group.

At that time, Father Tritz was 95, and the father provincial then, Fr. Danny Huang, gave his alma mater the challenge of serving the poor directly by ensuring the future of Erda. Fr. Johnny Go accepted the challenge on behalf of the Xavier community.

Now, seven years later, as Xavier School marks its own milestone of 60 years, Fr. Pierre Tritz Institute-Erda Tech is poised to take off as a bigger and better technical high school.

As Father Tritz fell ill on the afternoon of Sept. 9, the FPIP Board approved the property deal for Erda Tech, not knowing that Father Tritz would be around for just another day. It was as if he waited only long enough to get things going for the school that bears his name and to see through his vision of education for the poor.

Inspired by Father Tritz, the family of the late Andrew Gotianun and the whole Filinvest Group are working with Xavier University in Cagayan de Oro and Erda to start another Tech-Voc Senior High School at the Filinvest project in Phividec, Villanueva, Misamis Oriental.

To many Jesuits, Father Tritz was the lone ranger who worked with his personal network to serve the poor directly. He lived outside the Jesuit community for more than four decades, although he was always welcome at Xavier School where his fellow missionaries in China lived.

Though not personally known by most Jesuits, Father Tritz’s reputation looms large in their consciousness as a towering figure who went to the frontiers and peripheries of society to serve the last, the least and the lost.

At his 60th anniversary as a Jesuit in 1993, Father Tritz said, “I am thankful to my superiors for giving me complete freedom to devote myself entirely to the services of our children and leprosy patients.

The bond that unites Jesuits is often misunderstood. We are sometimes called a kind of Mafia, an occult and dangerous society of some Machiavellian organization. That is not true!

The bond that unites us is a spiritual bond. A bond that is developed during the spiritual exercises that make us conscious of our vocation as companions of Christ, as our name indicates.

This companionship is made to strengthen us like soldiers who know that victory will depend on mutual solidarity and the backing of the whole army.”

Father Tritz’s love and work for the poor has had a great impact on me. I first met him in 1999 in Cebu where I was a regent. Already in his mid-80s, he had some business there and was staying in the Jesuit community.

One night, he arrived and happened to see me in the corridor. He asked me to his room to help him, as he had difficulty bending down. He actually asked me to remove his socks and shoes. What a lesson in humility, I thought to myself.

There was no formal introduction and exchange of pleasantries. It was late at night, he was tired and needed help, and I stepped up to the job. Who could have known that one day, I would inherit his mission as president of the Erda Group?

When I began this work alongside my duties at Xavier, Father Tritz was already in declining health and we could not have extended conversations. And yet he became, for me, a living reminder of the Christian and Jesuit vocation to take care of those left behind by society.

Isn’t it ironic that he who had lived and served outside ordinary Jesuit structures became the one who lived out the Jesuit mission in an extraordinary way?

The governments of the Philippines, France and Germany, and various groups and universities have honored him, and many regard him as the Mother Teresa of the Philippines. Now he had joined her in heaven soon after she was declared saint by the Church. Not a few believe that someday Father Tritz will enter that roster, too.

While the members of other religious orders are named after their founders, St. Ignatius Loyola wanted his men to focus only on Jesus, taking his name and holding Him always close to their hearts.

In the final hours of Father Tritz, I brought him a holding cross which he gripped until he peacefully returned to God.

Years ago, I removed the shoes of Father Tritz so he could rest for the night. He rests in eternity now, and I have big shoes to fill.