Duterte refuses to be reprimanded by international bodies 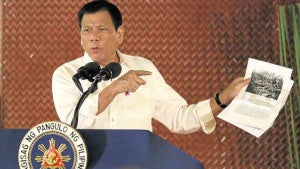 MANILA — If he was still a city mayor, Rodrigo Duterte could take criticism from international bodies. But as Philippine president, he would not allow himself to be reprimanded by them, Duterte said on Wednesday.

A day after cursing at the European Union for calling for a stop to extrajudicial killings of drug suspects in the country, President Duterte explained why he was “bullshitting” the international body.

He noted that even the EU was reprimanding him.

“When I was mayor, that’s okay. It’s different now that I’m President because I represent a country,” he said in a speech before soldiers in Camarines Sur.

“I am the President of the republic. Why would you insult me, why would you curse at me as if I’m under you? That’s why I’m bullshitting all of them,” he said.

The EU earlier expressed concern over the rising number of slain drug suspects. EU lawmakers had also said the President’s statements encouraged the killing of drug traffickers and users.

On Tuesday, in a speech before local government officials in Davao City, Mr. Duterte lashed back at the EU.

The President said “f*** you” to the EU, and flashed his middle finger, a move applauded by his audience.

He also said the group’s statement was only intended to atone for its own sins.

According to him, a study of history would show that EU member countries were involved in atrocities in the Middle East.  SFM