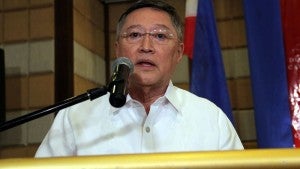 MANILA — Contrary to debt watcher S&P Global Ratings’ assessment that “the stability and predictability of policy-making has diminished somewhat” under President Rodrigo R. Duterte, Finance Secretary Carlos G. Dominguez III said that the administration’s policies have been “clear and consistent” from the start.

In a statement issued by the government’s Investor Relations Office (IRO) Wednesday, Dominguez welcomed the debt watcher’s latest move to keep the Philippines’ investment grade credit rating, saying that “it affirms that the Duterte administration is on the right track in pursuing its 10-point socioeconomic agenda that aims to keep the Philippine economy on its high growth path.”

“The continued investment-grade rating gives the new government greater resolve to transform the economy into a truly inclusive one by pursuing, among others, a tax reform plan that seeks to generate enough revenues to grow the middle class, energize the corporate sector, and raise investments in human capital and social protection to drastically reduce poverty incidence,” Dominguez said,

However, the Department of Finance chief did not agree with S&P’s opinion that policy predictability and stability were somewhat diminished when the Duterte administration took over.

“The administration’s economic pronouncements have been clear and consistent from the very beginning,” Dominguez was quoted by the IRO as saying, further pointing out that “the Duterte administration’s 10-point socioeconomic agenda was announced early—even prior to the President’s formal inauguration—and that the action plans to realize the agenda have already been operationalized.

“The Duterte administration is loud and clear in its message. We want to achieve a kind of economic growth that is not only robust and sustainable but one that actually lifts significantly more Filipinos out of poverty,” Dominguez said.

“If one is able to see through the noise created by negative headlines, he may have better and comprehensive understanding of the exciting, positive changes that are ahead of the Philippines,” the finance secretary added.

Bangko Sentral ng Pilipinas (BSP) Governor Amando M. Tetangco Jr. said: “The Philippines’ ability to keep its credit rating well within the investment grade scale, which has transcended change in political leadership, is a testament that the country’s economic gains have been built from deeply rooted structural and sound policy reforms over the years.”

“Through continued conduct of sound monetary policy and prudent bank supervision, as well as efficient management of the country’s external accounts, the BSP will help make sure these economic gains are further enhanced moving forward,” Tetangco added.

In a statement Wednesday, S&P said President Duterte’s law and order thrust “could undermine respect for the rule of law and human rights, through the direct challenges it presents to the legitimacy of the judiciary, media, and other democratic institutions.”

S&P noted that the Duterte administration “has a strong focus on improving law and order, which has allegedly resulted in numerous instances of extrajudicial killings since he came to power.”

“When combined with the President’s policy pronouncements elsewhere on foreign policy and national security, we believe that the stability and predictability of policymaking has diminished somewhat,” according to S&P.

As such, S&P said “a higher rating is unlikely over our two-year ratings horizon” for the Philippines.

“The ratings on the Philippines reflect our assessment of its lower middle-income economy and rising uncertainties surrounding the stability, predictability, and accountability of its new government,” S&P said.

The said weaknesses were nonetheless offset by the country’s strong external position on the back of increasing foreign exchange reserves as well as low and decreasing foreign debt, it added.

In this regard, S&P kept the Philippines’ credit rating one notch above investment grade, affirming the current ‘BBB’ long-term as well as ‘A-2’ short-term sovereign credit ratings, with a stable outlook.

Credit ratings are a measure of a government’s creditworthiness. As the stability of state finances is also related to a country’s performance, credit scores serve as a proxy grade for the economy.

Also, improved ratings would allow the government to demand lower rates when it borrows from lenders, which could translate to lower interest rates for consumers and businesses borrowing from banks using government-issued debt paper as benchmarks for their loans.

However, foreign investors’ interest to pour money into what was Asia’s rising star amid robust economic growth in the past six years were seen souring after President Duterte recently voiced controversial remarks against US President Barack Obama, the United Nations and the European Union.  The US and EU are among the country’s top trading partners.  SFM