Let the Dead Bury the Dead 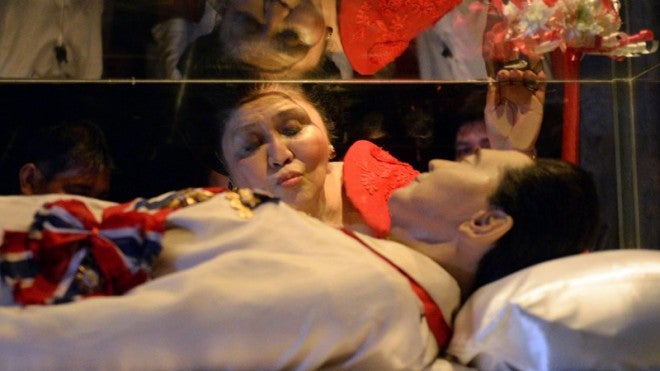 New York—This September 21st will mark the forty-fourth anniversary of martial law in the Philippines, when in 1972 President Ferdinand Marcos imposed a national state of emergency. The reason? Ostensibly to quell a rising tide of subversion, particularly from the communists, that would undermine the very fabric of society. (The declaration was actually issued two days later, but backdated to the 21st, as Marcos believed that 7, and any number divisible by 7—as 21 are—was his lucky number.)

But the real reason for martial law was so he could remain in power, barred as he was by the Constitution from seeking a third term as chief executive. And stay in power he did, along with his wife, the would-be czarina Imelda Romualdez Marcos, and a cabal of cronies, for fourteen years.

In February of 1986, the kleptocrats were swept out of Malacañang, in the phenomenon known as People Power, an amazing display of massive and peaceful street protests that were mostly and remarkably free of bloodshed. An aroused nation kicked out the tyrants, straight into the arms of the United States that had for so long backed this murderous regime.

Marcos is believed to have looted the national treasury of an estimated $10 billion hidden worldwide. The economy was in ruins, with close to $30 billion of external debt, inflation of over 50%, 58.9% incidence of poverty, and a negative economic growth rate.

In addition, the Marcos regime dealt brutally with those who opposed his one-man rule. Amnesty International estimates the number of opponents killed by the Marcos dictatorship at 3,240; those raped and tortured at 34,000; and citizens imprisoned at 70,000.

Already in poor health when he fled the country, Marcos died in exile in Hawaii, in 1989. Imelda was allowed by the Ramos administration to fly the body back in 1993 on condition that he be buried in the Ilocos region and not at the Libingan ng Mga Bayani, or Heroes’ Cemetery. And he was. And there he lies up north, in the family mausoleum.

But perhaps not for long. If Panderer-in-Chief Rodrigo Duterte has his way, with the Marcos family’s approval, he would have the body reburied at the Heroes Cemetery. Duterte says he is doing this in order to heal the wounds that divide our society—wounds that by the way the Marcoses themselves caused. He also says that the dead dictator was a soldier and thus deserves to be interred at the Libingan ng Mga Bayani.

As former party list congressman Walden Bello put it at a protest in Rizal Park about a month ago, that would be akin to burying Al Capone at Arlington Cemetery. As to being a soldier, well, he may have been one but he faked his war record and his medals.

(The burial has been delayed by an order of the Supreme Court, but this is a temporary stay. The interment may yet take place sometime in October.)

Burying him at the Heroes Cemetery would be a colossal affront to the nation, to the 2 million who flooded the streets in 1986, to all those who suffered under the Marcos regime, and to the military men who did give their lives for the country.

It would be a brazen attempt to rewrite history.

It is to spit in the eye of a populace that came out and said Tama Na! Palitan Na! Enough! Time to Change!

Why is President Duterte doing this? Is there any method to this madness?

At least with his avowed war on drugs, though I vehemently oppose the morality and legality of the extrajudicial means used, there is a goal that no one would disagree with: eliminating the scourge of drugs. But with the burial of a corrupt, brutal dictator in hallowed ground, what good reason would there be?

None whatsoever. Except to please the Marcoses.

It is telling that, at his inauguration last June, he had Bongbong Marcos, who lost in his run for the Veep’s office, as one of his guests. Not, however, Vice-President-Elect Leni Robredo. You see, the president didn’t wish to hurt Bongbong’s feelings. I suppose Duterte, the ever-so-polite host, didn’t want to risk poor rich Bongbong throwing a tantrum and spoiling the party.

What about the feelings of the country, Mr. President?

He can curse the Pope and President Obama, he can stand up to the UN and the U.S., but not it seems the Marcoses.

This macho president, who talks tough and declares he is answerable to no one but the sovereign nation of the Philippines, turns out to be following the wishes of the dead man’s family. One family above the sentiments of a country that judged Marcos guilty as hell.

The Panderer-in-Chief is also known as the Punisher. In this instance, though, who is being punished?

Clearly not the Marcoses.

Read Next
PH needs US to protect sea claims – Duterte
EDITORS' PICK
Mass testing on April 14; but who to test is unclear
Cash aid trickles down to cities meeting DSWD requirements
US urges masks as dramatic steps to combat virus roll out
Rights groups wary as NBI summons 17 for ‘fake news’
Quick chat with Nicole Andersson: ‘You really don’t need much to be happy’
Quest for COVID-19 cure: PGH needs blood samples from recovered patients
MOST READ
Angelica Panganiban on endorsing Duterte in 2016: ‘Patawarin niyo ko’
PACC to NBI: Probe Robredo for ‘competing with national govt’ in fight vs COVID-19
PACC’s COVID-19 motto? ‘Lahat ng tutulong, ikukulong’ — Lacson
5 Filipinos on Forbes Asia’s “30 Under 30” roster
Don't miss out on the latest news and information.