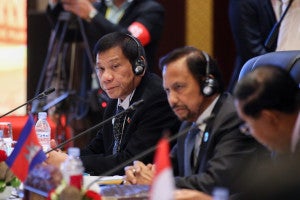 President Rodrigo R. Duterte participates in a plenary session during the second day of the ASEAN Summit at the National Convention Center in Vientiane, Laos on September 7, 2016. KING RODRIGUEZ/PPD

MANILA — The Philippines needs the United States for the South China Sea, where it remains locked in a territorial dispute with China, according to President Duterte.

Mr. Duterte made the statement on Tuesday, in the course of explaining his earlier remark that he might later ask US soldiers to leave Mindanao to pave the way for talks with Moro rebels.  The Moros or the Muslims in Mindanao have been pressing for a Bangsamoro state and demanding recognition by the US of the brutality suffered by the Moros as it colonized the Philippines 100 years ago.

“I never said get out of the Philippines, for after all, we need them there in the China Sea. We don’t have armaments,” he said.

The Permanent Court of Arbitration in The Hague, acting on the Philippines’ complaint, earlier invalidated Beijing’s claim to almost the whole of the South China Sea. China, though, has refused to recognize the ruling.

The President is seeking bilateral talks with China over the issue, and has said that he would insist that discussions between the two countries be based on the decision.

“I really do not know what’s wrong with these Americans. They look at us as if we’re lowly,” he said.

He repeated his earlier lament over the FA-50 jets the country had acquired, which he said did not have missiles.

He said the Philippines had bought them from South Korea, but these were made with US technology.  The Philippines could not have acquired the jets without US consent, he said.

Earlier, Mr. Duterte had railed against the US for planning to discuss the human rights situation in the country with him, and said the Philippines was no longer a vassal state.

But he subsequently said the Philippines would not cut ties with its close allies.

Regarding intelligence equipment, the country would have to be careful and ensure that it would get only from trusted sources, said Duterte.

“There will be at least one or two sources for our intelligence equipment. We just can’t buy these anywhere, because they’re listening to us,” he said.

“There are about two countries where we are safe. They are allies,” he added.

But he did not identify these two countries.

When it came to firepower, the Philippines could get cheap ones from other countries, he said.

Mr. Duterte also promised to arm all soldiers with a Glock pistol as sidearms. His announcement was met with applause.  SFM 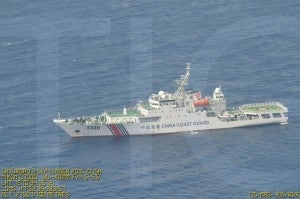