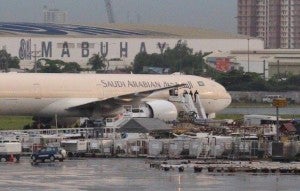 MANILA — Passengers of Saudi Arabia Airlines flight SV 872 — which made an emergency landing at the Ninoy Aquino International Airport and was isolated after mistakenly making a distress call for a hijacking on Tuesday — had already stood up to disembark when they were told to return to their seats.

“Their passports were then inspected,” Sorayah Ali, 49, told the Philippine Daily Inquirer on Tuesday, quoting her cousin Hadji Sommayah Sultan who was on the plane.

The passengers, mostly Muslims returning from the annual pilgrimage to Mecca, got held off for about two hours at the tarmac of the NAIA on Tuesday afternoon.

Sharief Macabando, 23, said he was monitoring the flight to fetch his mother, two brothers and sister-in-law.

Macabando’s mother Labi called him and said there seemed to be nothing suspicious inside the plane but passengers were alarmed when armed security personnel approached the aircraft.

Labi, who was seated in the business class section, was able to get down the plane around 4:50 p.m., her son said.

Farhannah Ambor Casan, who was waiting for her parents, said the airline thought Indonesian passengers with fake passports were able to get on the plane, according to reports reaching her relatives.

“But it was all a mistake,” Casan told the Inquirer.

As of 7 p.m., relatives were still waiting for the passengers to come out of the airport.

Macabando said his mother and other passengers were still at the immigration counter.  SFM 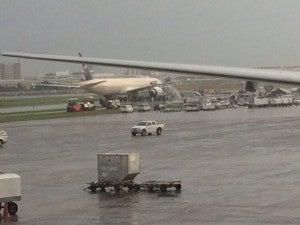 Passengers of a commercial flight from Saudi Arabia are allowed to disembark after being placed in total isolation at the Ninoy Aquino International Airport on Tuesday afternoon (Sept. 20, 2016). Jeanette Andrade/INQUIRER