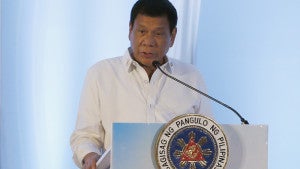 MANILA — President Duterte let loose a fresh string of tirades against the European Union, on Tuesday, after it called for a halt to extrajudicial killings of drug suspects in the Philippines.

“I read the condemnation of the EU against me. I will tell them, ‘fuck you.’ You’re doing it in atonement for your sins,” Mr. Duterte said in a speech before local government officials in Davao City.

Duterte said members of the European Union have become strict about the behavior of other nations due to their “guilt feelings” over the atrocities they had committed in the past.

He also called them hypocrites, as he added that a check of encyclopedias would show what European countries have done, he said. For instance, France and Great Britain had killed Arabs, he said.

Mr. Duterte also asked who he was supposed to have killed in the Philippines.

Assuming accusations against him were true, and there were over 1,000 killed in the country, he asked who were the people killed.

“Who are they? Criminals? You call it genocide? How many did they kill?” he asked.  SFM