Chinese are coming, on cruise ship no less 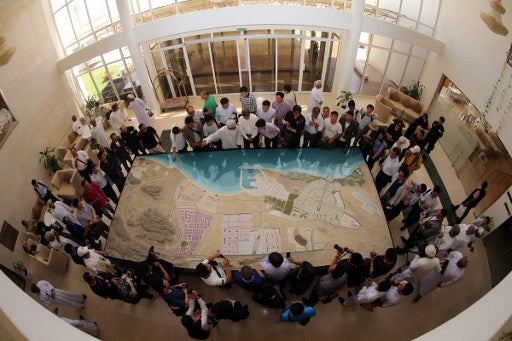 A picture taken with a fish-eye lens shows Chinese investors listening to an explanation as they check the model of the dry dock which is to be built following an economic agreement, on May 24, 2016 in the Omani port city of Duqm. AFP FILE PHOTO

CHINESE investors and tourists are starting to warm up to the Philippines on the back of President Duterte’s repeated calls to make peace with China.

Francis Chua, chair emeritus of the Philippine Chamber of Commerce and Industry (PCCI), noted this growing interest, as he disclosed that there will be a cruise ship—with some 2,000 Chinese tourists and investors—docking in the Philippines soon.

Chua declined to cite specifics but pointed out that this may be the first time such a huge group from China would be arriving in the Philippines at a given time.

“A lot of Chinese are coming in and a lot of people here would like to have more business relationship with China…There is a cruise ship coming in with 2,000 Chinese people, supposedly tourists and investors, and this is significant. (China) is sending somebody to meet me next week,” Chua told reporters on Monday.

The PCCI official admitted that the previous administration was clear in its stance of not wanting to have anything to do with China. But it seems, he said, that under the new administration, both countries are warming up—a development he deemed would benefit local companies and industries.

“If our relations with China are better, we can get more investments from them, loans and business opportunities for both sides. Also, if the relationship (improves), we can ask them to open up the job market in China for Filipinos. There are a lot of Filipinos working in China but there is no law. We just want to make it legal,” Chua said.

Chua cited as an example Indonesia, where Chinese companies’ exposure is worth about $10 billion. Such potential is something that local industry leaders want to tap as well.

He likewise disclosed that many Chinese firms have expressed strong interest to invest in Philippine infrastructure and energy projects, including a nuclear plant should the government decide to pursue the inclusion of nuclear power in the energy mix.

“They have always been expressing their interest before but no one was listening to them…Chinese companies have always been here but [the exposure] has not been that big. Many of China’s big state-owned corporations are here and they have never left the Philippines. The same goes for the private companies. The difference now is that they are more interested,” Chua said.

There are, however, no formal talks yet but if the Philippine government is able to sit down with China on a bilateral arrangement then it will become formal, Chua said.