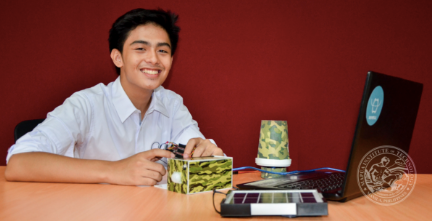 Santos, a grade 11 student under the Science, Technology, Engineering and Mathematics (STEM) strand of Mapúa, led his teammates from Valenzuela City School of Mathematics and Science to victory and bagged the Gold Award for their ingenious invention called “Securitree.”

True to its name, the youthful group came up with a device with built-in sensors against illegal loggers and forest fires, which won first place in the Environment and Biology category at the WICC) held at the Seoul Trade and Exhibition Convention.

On the outside, “Securitree” is designed as a camouflaged-themed box equipped with sensors, a camera and a solar panel, and is intended to be installed in a tree.

The motion sensors detect suspicious activities, which would trigger the built-in camera to take pictures, while a micro-controller board analyses the captured data and sends them to forest authorities through the internet.

The innovative project was also made possible through the widely emerging technology of the Internet of Things (IoT), which enables autonomous communication between intelligent devices that are sensitive to the presence of a person.

“During the forest fires on Mt. Apo, we decided to come up with something that will protect our forests from the main causes of deforestation: illegal logging and forest fires,” he said in a report from Mapua’s official website.

“Securitree is a security system equipped with motion and fire sensors that has the ability to detect and analyze illegal logging and forest fires,” he added.

Apart from the first-place finish, “Securitree” was also commended with the Excellence Grand Award in the same competition.

Organized by the Korea University Invention Association, the WICC welcomes young inventors from all over the world to showcase their projects internationally. A record 20 countries participated this year, sending some 15,000 students from elementary through college.

To further build on the success of Santos’ team, Mapúa Senior High School announced that they will be offering a basic course on IoT for incoming Grade 12 students under the STEM strand in 2017.  Khristian Ibarrola