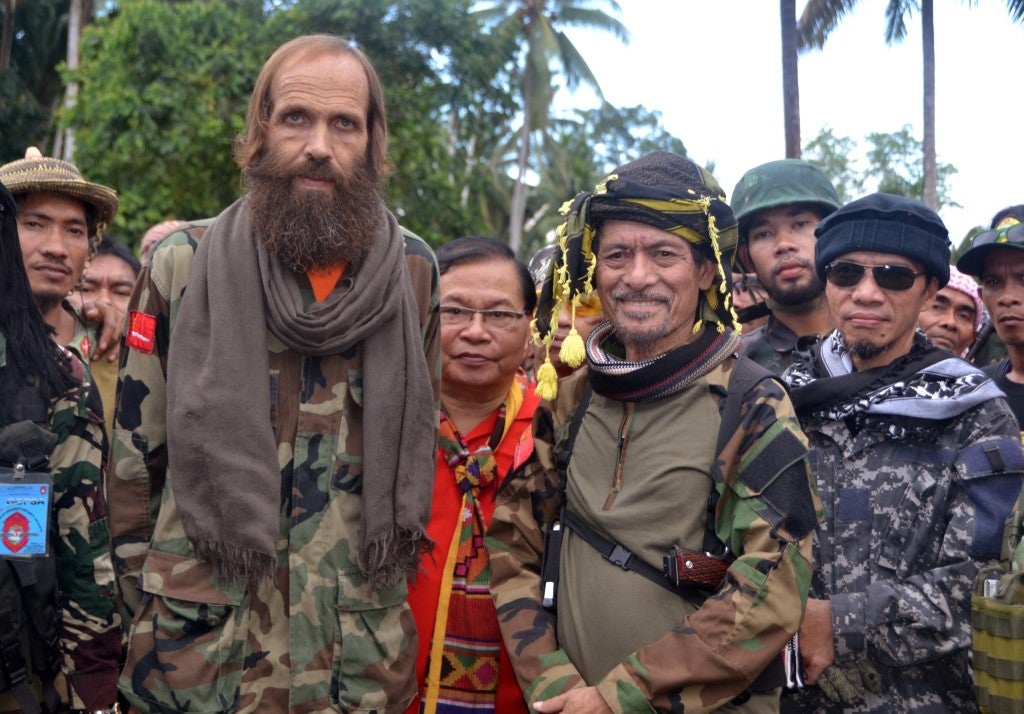 Released Norwegian hostage Kjartan Sekkingstad, front row left, poses with Moro National Liberation Front Chairman Nur Misuari, front row second right, after being turned over by ransom-seeking Abu Sayyaf extremists in Indanan township on Jolo island in southern Philippines Sunday, Sept. 18, 2016. Sekkingstad, who was kidnapped last year along with two Canadians and a Filipino, was released Saturday and was turned over Sunday to Misuari, who in turn turned him over to Presidential adviser Jesus Dureza. (AP Photo/Nickee Butlangan)

ZAMBOANGA CITY – Both the Indonesian government and the Philippine military recognized the big role of the Moro National Liberation Front (MNLF) in Saturday’s release of four kidnap victims — a Norwegian and three Indonesian fishermen.

Indonesian Defense Minister Ryanmizard Ryancudu told reporters here, on Sunday night, that they were grateful for the help extended by the MNLF to secure their people safely from the Abu Sayyaf.

“The MNLF knows the terrain. They know some of the people from the Abu Sayyaf, and they have their own ways of dealing with the Abu Sayyaf,” Dela Cruz said.

But Dela Cruz also said President Duterte’s directive to destroy the bandit group resulted in efforts involving military, police, local government and even the MNLF to rescue and secure safely the hostages.

“As we all know, the forefront in this endeavor is the President’s directive to really go after this group,” he said, adding that at least 16 battalions of government troops have been deployed in Sulu.

“In fact, some of the civilian populace are giving us information and this is to our advantage, and hopefully in the coming days, this support will reduce and degrade the Abu Sayyaf into an insignificant level,” Dela Cruz added.

Samsula Adju, spokesperson of the MNLF in Sulu, said it was Tahil Sali, MNLF Vice Chair for Political Affairs, who worked hard for the release of hostages.

Adju sad Sali was authorized by MNLF chair Nur Misuari to negotiate with the Abu Sayyaf leader Raddulan Sahiron for the safe release of Norwegian Kjartan Sekkingstad, who was freed on Saturday.

Sekkingstad on Sunday thanked “Misuari and his finest men who released me yesterday afternoon.”

The MNLF said no ransom was paid in exchange for Sekkingstad’s freedom.

“As far as I know, no ransom was paid in pursuant to the MNLF’s adherence of no ransom policy,” Adju told the Philippine Daily Inquirer by phone.

Muammar Askali alias Abu Rami, who claimed to be the spokesperson of the Abu Sayyaf, earlier said P30 million was paid as ransom.

After the release of Sekkingstad and the three Indonesian fishermen and two Filipino kidnap victims were also freed on Sunday.

The victims, sub-contractors of a Telecom company, who were kidnapped in Patikul town on August 6, were recovered by a resident, Tan said.  SFM