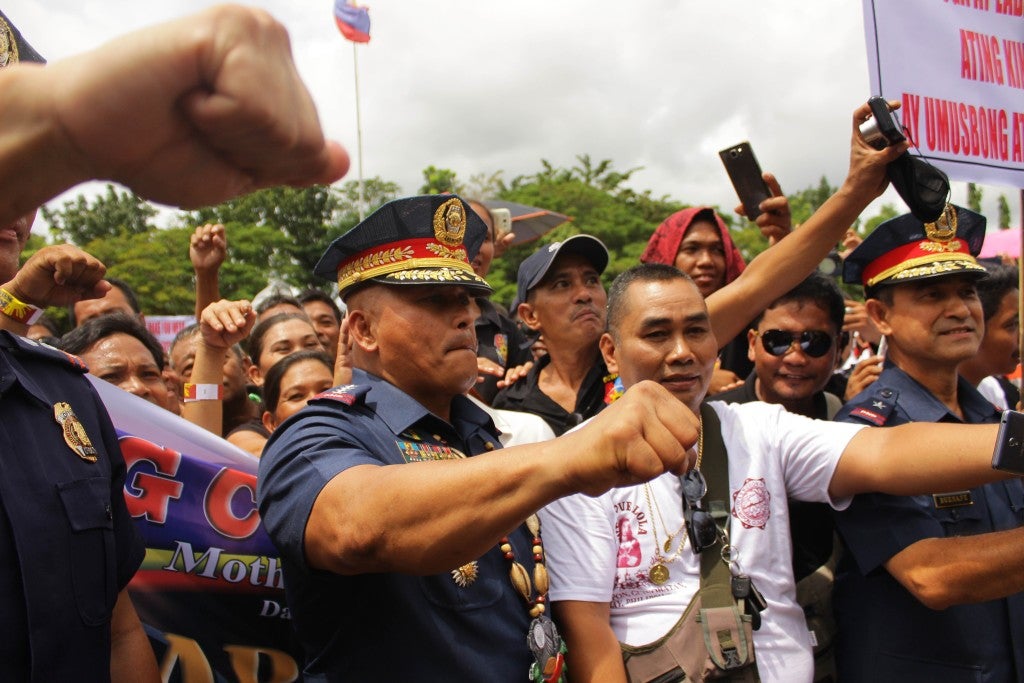 Philippine National Police chief Dir. Gen. Ronald “Bato” Dela Rosa will attend a conference in Bogota, Colombia to discuss counterterrorism and anti-drug efforts of the Philippine police to its counterparts in the South American country.

The Philippines and Colombia share common issues on insurgency and the proliferation of drugs.

“The purpose of his visit is to attend a counter-terrorism, counternarcotics conference so I believe the PNP chief will be presenting our programs here and probably learn how we can improve our ongoing fight against illegal drugs based on the experience of Colombia and other countries conducting illegal drug campaign,” PNP spokesperson Senior Supt. Dionardo Carlos said in a press briefing on Monday.

Dela Rosa, along with Police Director Fernando Mendez Jr., Director for Personnel and Records Management (DPRM) chief; and Senior Superintendent Alden Delvo, Senior Executive Assistant (SEA), will join the Counterterrorism and Counternarcotics Exchange organized by the US Department of State.

Deputy Director General Francisco Uyami Jr. has been tapped as PNP Officer-in-Charge during the absence of dela Rosa until September 23.

The PNP delegation left the country via regular commercial flight on Sunday evening.

Among the issues to be discussed are the emerging terrorist threats, narco-terrorism, and transnational drug trafficking.

The Office of Regional Affairs of the Embassy of the United States extended the invitation for the PNP to send a delegation in this international conference.  The three-man delegation will return on Saturday, according to PNP PIO.

President Duterte, whose campaign promise is anchored on solving the drug menace and criminality in the country, has waged a war on drugs and gave the PNP a deadline of six months to do the job.

But over the weekend, Duterte admitted that his self-imposed deadline would not be enough to eliminate drugs in the country. He then sought another six months, which will end June 2017, to solve the drug problem.

Before flying to Colombia on Sunday night, dela Rosa visited the wake of the cop who died in an encounter with armed drug pushers in Caloocan City last week.

Dela Rosa handed the family of PO1 Romeo Mandapat Jr. an initial financial assistance worth of P100,000. He was interred at the PNP Mortuary Chapel in Camp Crame in Quezon City. JE/rga

Read Next
I’m lucky to be alive, says Sekkingstad
EDITORS' PICK
Mass testing on April 14; but who to test is unclear
Cash aid trickles down to cities meeting DSWD requirements
US urges masks as dramatic steps to combat virus roll out
Rights groups wary as NBI summons 17 for ‘fake news’
Quick chat with Nicole Andersson: ‘You really don’t need much to be happy’
Quest for COVID-19 cure: PGH needs blood samples from recovered patients
MOST READ
Angelica Panganiban on endorsing Duterte in 2016: ‘Patawarin niyo ko’
PACC to NBI: Probe Robredo for ‘competing with national govt’ in fight vs COVID-19
PACC’s COVID-19 motto? ‘Lahat ng tutulong, ikukulong’ — Lacson
5 Filipinos on Forbes Asia’s “30 Under 30” roster
Don't miss out on the latest news and information.