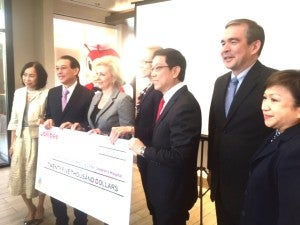 SKOKIE, Illinois –After its “most successful opening” last July 29 weekend in this village, just north of Chicago, all the top executive officers of the Jollibee Food Corporation (JFC) gathered here, Sept.15, to show their appreciation for the “overwhelming reception” that Filipino Americans in the Chicago area and neighboring states had given to their very first Jollibee restaurant in the Midwest.

JFC Chairman and Founder Tony Tan Caktiong and his wife, Grace, president of the JFC Foundation, personally handed an oversized check for $25,000 to the University of Chicago Medicine Comer Children’s Hospital, which was represented by Karen Stratton, Comer Children’s vice president for Women’s and Children’s Services and Jennie Ott, the hospital’s director of Child Life and Education.

Tan Caktiong led his officers including CEO Ernesto Tanmantiong and JFC Group President for North America Jose Minana in expressing their company’s dedication to family and children’s values and their desire to give back to the community.

Also attending the appreciation day was Consul General Generoso Calonge, who expressed his pride in Filipino entrepreneurship being able to be recognized abroad for the quality of its products and services. Especially recognized in the audience was the presence of a “Jollibee partner,” Carlos “Caloy” Go, CEO of Seafood City, which just two days earlier held a successful inauguration in Chicago of its first store east of Las Vegas. Another Jollibee is scheduled to open within the Seafood complex.

They spent time teaching children to do syringe art. Visiting with them was the Jollibee mascot who performed his signature “My Best Friend” dance. It was made clear that Jollibee would do the visitation on a regular basis.

Founded in 1974 as an ice cream parlor, Jollibee opened its first US store in Daly City in 1998. There are now 34 stores in the U.S. Globally, it has 3,000 stores. JBC is named the Philippines’ most admired company by the Asian Wall Street Journal. It has been awarded many times over by various reputable groups in the restaurant industry.

In interviews with customers who waited up to six hours to be served on Jollibee’s July 29th opening day, many said that “Chickenjoy,” “Jolly Spaghetti” and “Peach Mango Pie” were worth the wait. Some came as far as Michigan, Missouri and Wisconsin and lined up as early as 4 a.m. on a rainy day to be able to satisfy their cravings.

Notably, existing Filipino American restaurants in the Chicago area were benefited by the“spill-overs” from Jollibee’s first weeks of operation. “We ran out of food to serve due to a heavy traffic of hungry diners who just cannot wait any longer at Jollibee,” said an owner of another Philippine franchise that specializes in another Filipino favorite, “chicken inasal.”