Fiesta Filipina is a consistent award winner of accolades from all over the world, including the Banaag Award from the Philippine President Gloria Arroyo in December 2004.  To date, Fiesta Filipina has performed on stages in France, Italy, Greece, Austria, Spain, Brazil, Mexico, Poland, Azores (Portugal), USA and the Philippines. 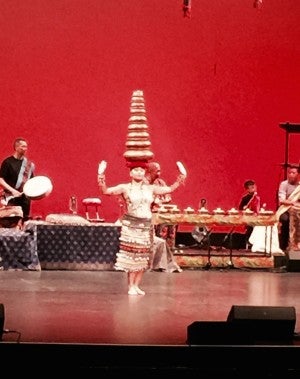 The anniversary celebration, Gintong Lakbay, lasted more than three hours, taking the viewers through the length and breadth of the Philippine archipelago through dance and music, from tribal dances of the people of the Cordillera in precolonial times (Salidumay) to the Spanish colonial period (Recuerdos), to the festival dances of the lowlands and the regal movements of a Maranao wedding dance (Singkil) that was the piece de resistance of the third (Maharlika) segment.

The fourth segment, aptly titled Regional Bridges, presented ritual dances from various tribes that celebrate important milestones such as harvest (Sayaw sa Platu by the Yakans of Basilan), victory in war (Maglalatik, a mock war dance from Binan, Laguna), or space clearing and healing (Pagdiwata by the Tagbanwa tribe from Palawan).

The fifth segment, Pistahan, presented a visual feast of the merrymaking dances from towns celebrating festivals, among them Bauan, Batangas with Kalatong-Subli, Bilaskogay from Capiz, Binasuan from Pangasinan, the ubiquitous Tinikling, and the Dinagyang, one of the biggest tourism events in Cebu.

Gintong Lakbay served as a reunion of sorts, with Fiesta alumni from 1966 to those who were members through the ‘70s, ‘80s, and ‘90s, to the young crop of junior members adding the “cuteness” factor to the show. 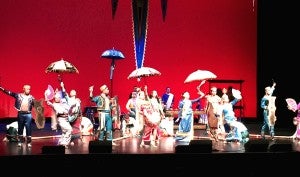 There was a dedication and presentation of mementos of recognition to Odette, Rose and Lynda Sue Aguinaldo, children of co-founders George and Estrellita Aguinaldo (executive director), for carrying on the work of choreographer, musician, researcher, historian, individually and together, to help keep the troupe going.

Fiesta Filipina Dance Troupe is composed completely of volunteers and is a testament to the company’s dedication and contribution to Canada’s multicultural community.  Based in Mississauga, Ontario, “This acclaimed Filipino Canadian folk dance ensemble has been “dedicated to promoting, preserving, and propagating Philippine arts and culture in Canada and the world through music, song, and dance for 50 years,” according to the souvenir program. 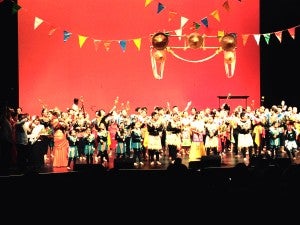 To encourage the young members to maintain the spirit of excellence, Fiesta has the George Aguinaldo Scholarship Award, and this year’s recipient is Faith Joy de la Pena.

Singers Emilio Zarris, a Fiesta alumnus, and Roy Christian Tugbang, who has performed with Fiesta Filipina over the years, were guest soloists. Fanny Calucag was master of ceremonies.