Veloso’s lawyers to Duterte: Please fight for our client 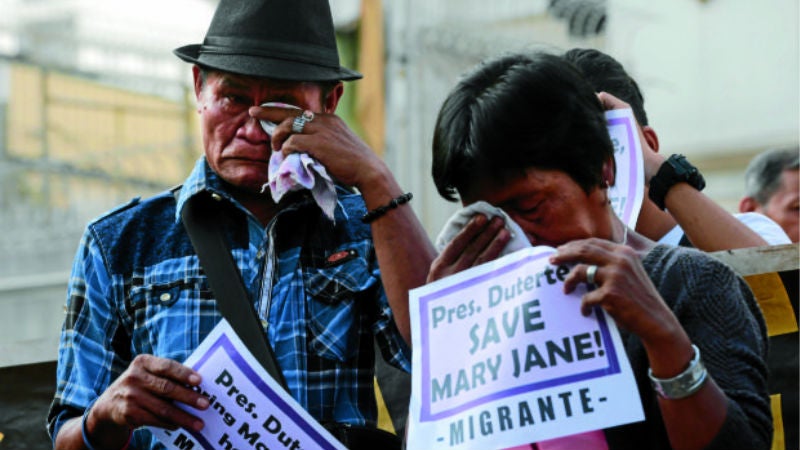 PARENTS’ PLEA Cesar and Celia Veloso appeal to President Duterte to help save their daughter, Mary Jane, who is on death row in Indonesia for smuggling heroin in 2010, during a candle-lighting event in Manila. GRIG C. MONTEGRANDE

CABANATUAN CITY – The National Union of People’s Lawyers (NUPL) urged President Duterte on Wednesday to fight for the freedom of their client, Mary Jane Veloso, who was convicted and condemned to death for smuggling 2.6 kilos of heroin into Indonesia in 2010.

Instead of picturing Veloso as a drug convict, Mr. Duterte must see her as “a poor, young mother of two young boys whose vulnerability was taken advantage of and exploited for the criminal purpose of drug smuggling, [of] which she had no knowledge of doing,” said lawyer Edre Olalia, NUPL secretary general, in a statement.

Olalia maintained that Veloso was innocent. “She is in truth not the criminal but the victim, the peddled and not the peddler not only of drug trafficking but also of trafficking in persons,” he said.

Veloso’s execution had been postponed by Indonesian President Joko Widodo, initially at the request of former president Benigno Aquino III in 2015, and again this year, to enable her to testify against her alleged recruiters, Ma. Cristina Sergio and Julius Lacanilao.

The government has been prosecuting Sergio, Lacanilao and a certain “Ike” for qualified human trafficking before the Regional Trial Court in Sto. Domingo, Nueva Ecija.

Lacanilao and Sergio have denied luring Veloso to Indonesia, where she was caught carrying narcotics.

They have been detained at the Nueva Ecija provincial jail here.

Olalia conceded that Veloso’s conviction, temporary reprieve and the appeal for clemency were “matters all within the ambit of Indonesian laws in the same way that the ongoing trial of cases against her recruiters and the plea for clemency are also matters in accordance with the Philippine laws.”

Philippine lawyers, and the judge hearing the human trafficking case, are scheduled to fly to Indonesia to take Veloso’s deposition.

“As the leader of this nation and as the pater familias of all Filipinos, President Duterte is expected to rise to his bounden duty and fight for her, and fight hard as he does for all the victims of this transnational infection,” Olalia said. JE