CPP: All US forces in PH must go | Global News
Close
menu
search

CPP: All US forces in PH must go 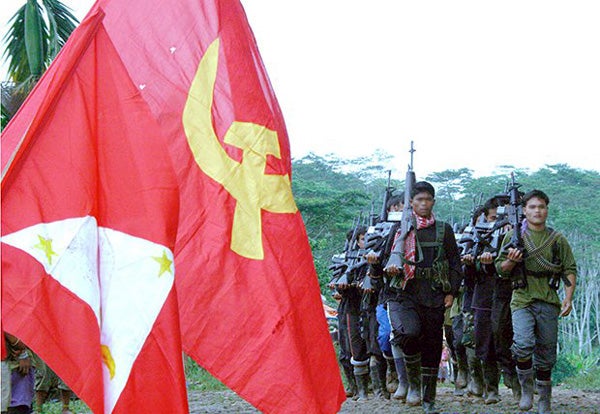 The Communist Party of the Philippines (CPP) on Tuesday expressed support for President Rodrigo Duterte’s pronouncement calling for the removal of US military forces in Mindanao, saying that all American troops operating across the country must go.

In a speech on Monday, Duterte said he wanted US forces out of Mindanao as their presence inflames Muslim insurgency in the region.

“For as long as we stay with America, we will never have peace in that land,” the President said during the oath-taking of newly appointed government officials, adding that Americans will be constant targets of extremist militants like the Abu Sayyaf.
READ: AFP: Duterte call for US forces pullout shows ‘concern for safety’

American troops are staying in the Western Mindanao Command headquarters in Zamboanga City.

The CPP lamented that the US military has set up military facilities inside the camps of the Armed Forces of the Philippines under the Enhanced Defense Cooperation Agreement, adding that US troops and advisers “have long been operating clandestinely” inside AFP camps.

“There are US military personnel inside the AFP’s Camp Aguinaldo as well as FBI and NYPD agents inside the PNP’s Camp Crame. In a display of gross lack of national dignity, the AFP has allowed the US military to maintain an exclusive compound inside its main headquarters which is off-limits even to the top generals of the AFP,” it added.

The Communist Party urged the Duterte government to probe and “demand a clear and complete accounting” of US operations being carried out in Sulu and the rest of the country, adding that the Philippines can truly be independent only if agreements with the US will be terminated.

“GRP President Duterte can only establish mutual relations with the US as well as with China and other countries by establishing the Philippines as an independent and non-aligned country. To do so, he must end all agreements which bind the Philippines to the US and make the country a vassal of the US military,” the CPP said.

“He must abrogate the Mutual Defense Treaty of 1951, the Mutual Logistics Service Agreement (MLSA), the 1998 Visiting Forces Agreement (VFA) and the EDCA. Only then can the Philippines stand on solid ground to demand equality and respect,” the statement added.

Malacañang on Monday said Duterte’s pronouncement was not a policy or directive, noting that the Philippine government is not turning its back on anybody. The Philippine military said they see the President’s remarks as an expression of concern for the safety of American troops.

The US State Department said it was not aware of any formal request by the Philippine government to remove its military personnel in Mindanao.

Duterte, who said he was “not a fan of the Americans,” earlier dared to throw expletives at US President Barack Obama in the Asean summit last week should the latter question him on human rights and extrajudicial killings. This prompted the White House to cancel a planned bilateral meeting between the two leaders.

Duterte also talked about human-rights violations committed by American colonizers in the Philippines during his brief speech at the East Asia summit, with Obama and United Nations Secretary General Ban Ki-moon in the audience. The US, UN and other international parties have raised human rights concerns amid an increasing body count in the administration’s antidrug campaign. TVJ/rga

Read Next
Duterte on Veloso: We will respect judgment of Indonesia court
EDITORS' PICK
Eleazar: PNP open to ICC probe but PH judicial process is working
P258M shabu seized, Chinese national arrested in Manila drug bust
Gilas out to prove Korea win not a fluke; Tab fires back at ‘lucky shot’ remark
SANTIS Delicatessen: The road to survival is sweet and savory
Man wounded as raid on illegal cockfight in Isabela leads to shootout
Piolo Pascual: The Ultimate Heartthrob continues to level up
MOST READ
Palace: Face shields no longer needed to be worn outdoors
LOOK: ‘Low vaccination’ turnout in 4 Manila sites after no walk-in policy
Lacson or Pacquiao a possible presidential candidate for NPC – Sotto
‘Pinadudumi ang politika:’ Sotto wants FB to shut down ‘troll farms’ until after 2022 polls
Don't miss out on the latest news and information.