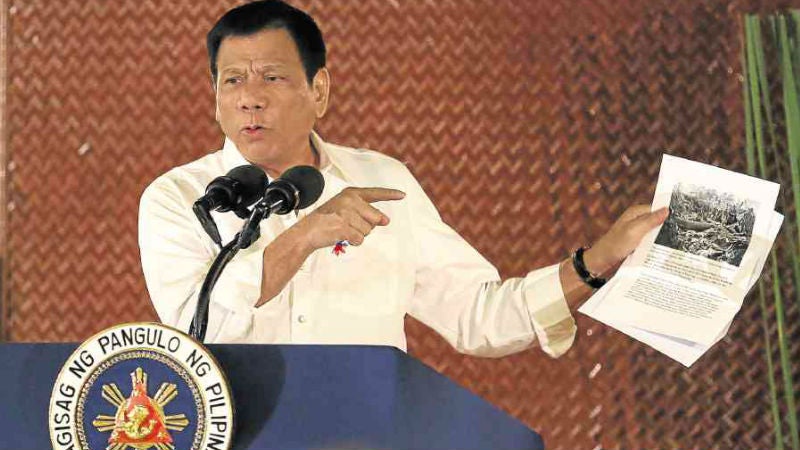 President Rodrigo Duterte’s call to pull out US forces in Mindanao may just be part of his stance against US President Barack Obama, a minority lawmaker said on Tuesday.

In a press briefing at the House of Representatives, Albay Rep. Edcel Lagman said the President’s latest dig against US presence in the country goes back to his stance against Obama, whom Duterte called a “son of a b****.”

Duterte denied directing the expletive at Obama, blaming the media for feeding him the question about Obama’s supposed plan to ask Duterte about the raising the human rights violations amid the administration’s war on drugs.

Lagman said while it is laudable that Duterte has a sense of history by tracing the US brutalities against 6,000 Moros in Mindanao during the pacification campaign in the 1990s, this historical fact should not be used to justify the current administration’s own atrocities of human rights violations at the height of its war on drugs.

“We appreciate the president’s digging back to history about the American brutalities during the Philippine-American war years ago. But we should always remember that past brutalities cannot justify present atrocities being committed by the present administration,” Lagman said.

“It is a truism that a wrong cannot right another wrong,” he added.

For his part, Magdalo Rep. Gary Alejano, a former soldier who figured in the Oakwood mutiny, refuted Duterte’s statement that the pullout of US forces was to keep them safe precisely because they are the high-value target of the bandit group Abu Sayyaf.

Alejano said the Philippines could not afford to pull out American soldiers who were helping Philippine troops in collecting intelligence information from the Abu Sayyaf and were helping the country boost its national security capabilities to defend its territories.

“Malaking impact sa atin yan (It has a huge impact on us) considering the fact that because of our dependency to the United States before when they had bases in the Philippines…  At the same time, the US is providing us the protection or defense cover for the meantime that we have not really developed our capability (to protect our territory),” Alejano said.

“And plus the fact that… very substantial po ang ating engagement with the United States against terrorism, against Abu Sayyaf. We don’t have the technology right now for monitoring activities of the Abu Sayyaf. Kaya nga po tinutulungan tayo ng United States sa (That’s why the United States is helping us in) information gathering, intelligence gathering kasi bahagi ito ng anti-terrorism campaign ng US (because it’s part of the anti-terrorism campaign of US),” Alejano said.

Alejano said US forces are well-equipped enough not to let any of their soldiers be abducted by the Abu Sayyaf.

“US soldiers are well-armed and well-trained, but they are not directly engaged with the terrorists or Abu Sayyaf. Nandun sila sa kampo (They are at the camp), well-secured. Wala pa namang nakikidnap na US military personnel down there sa south, wala pa po (US military personnel have not been kidnapped down there in the south),” Alejano said.

“I don’t think parang nagmamagnet, parang iniincite natin ang mga (it magnetizes, it seems like we are inciting) Moro people against the US,” he added.

Duterte’s stance against the United States was seen as part of his perceived inclination toward China as an ally, although China has built illegal structures over the West Philippine Sea which was declared by an arbitral tribunal as part of the Philippines’ exclusive economic zone.

Duterte had also wanted the country to pursue an independent foreign policy. RAM