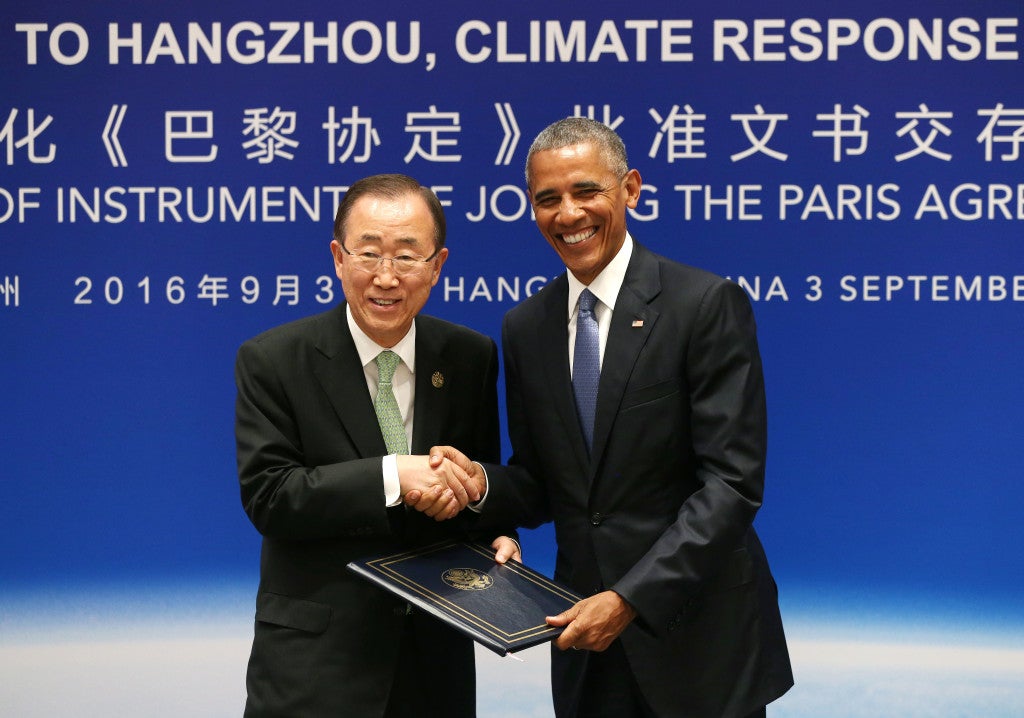 US President Barack Obama (right) and UN Secretary General Ban Ki-moon pose for photographers as they shake hands during a joint ratification of the Paris climate change agreement at the West Lake State Guest House in Hangzhou in eastern China’s Zhejiang province on Sept. 3. AP

In a speech before hundreds of Filipino community members at the Shangri-La Jakarta on Friday, Duterte said he presented “a few pages” of photos of slain Muslims during the pacification campaign at the height of the Philippine-American War in the 1900s.

The President said he was in a roundtable meeting with Obama and Asean leaders.

“Ako, because of the pressure para huminto na sila, sabi ko, since human rights was mentioned, I produced a few pages of pictures in the pacification campaign by the Americans at the turn of the century,”  he said.

He said Obama, who has raised concerns about the drug-related killings in the Philippines, was silent.

“Tumahimik sila. Kasi ako handa na ko. I was waiting for Obama to respond. Eh ito, abugado to abugado tayo. Sige daw. Wala. That was the only encounter. That was the only exchange at the holding room and when I said, ‘I never made that statement, check it out,’” he said.

The President said United Nations Secretary General Ban Ki-Moon, who was also present in the discussion, was speechless.

“This is human rights. What do you intend to do? Do not tell me this is water under the bridge. Human rights violation either committed by Moses or Abraham is still a violation of human rights. When was this philosophy about human dignity in the world evolved? Now? Or during this time?” he added.

Prior to the Asean summit in Vientiane, Laos, the White House said Obama might raise the issue on human rights violations in the Philippines as the Duterte administration intensifies its crackdown on illegal drugs.