Chicago Fil-Am Center gets back its stolen Rizal bust 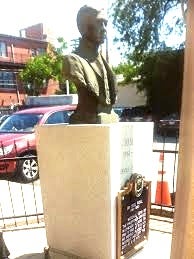 This bust of Dr. Jose Rizal, stolen last year, has been found and returned to the Fil-Am Center in Chicago. PINOY

CHICAGO—Four days before the dedication of the new bust of Dr. Jose P. Rizal that should have replaced the one that was stolen in June last year, Bobby Luna, the manager of this city’s Jose Rizal Heritage Center received a phone call from a Chicago Police officer who wanted to meet with him at the center.

Detective Jeff Ignowski of CPD 23rd District met with Luna on Sept. 6 afternoon and with him was the missing bust of the Philippine National Hero. Luna confirmed that it indeed the stolen bust. After checking it up, Luna said the bust was in good condition.

A call by PINOY to Det. Ignowski for more information about the recovery of the artifact only resulted with the officer repeatedly saying he “could not give any information… this is still under investigation.”

Suddenly, the officers of the Filipino American Council of Chicago (FACC) who are the trustees of the center are faced with a dilemma of what to do with the bust donated by the owners of Seafood City.

A ceremony was scheduled on Saturday, Sept. 10, to unveil the new bust. However, the pedestal for the old bust clearly shows the names of some three dozens Filipino Americans whose donations made the center’s Rizal memorial possible.

As of press time, no FACC officer can ascertain their next move. On the question of whether a complaint will be filed against the culprit who kept the bust for more than one year, Luna said that the FACC board has yet to meet to determine their next move.

Initial investigation points to two witnesses who recorded on a mobile phone the incident involving a blonde male with mustache removing the bust and bringing it to his red car. The recording was given to the police. A CPD officer on patrol recently saw a car that fitted the description of the one involved in the robbery.

The car was stopped, but the driver did not fit the features of the person caught in the video. When the driver was asked if he knew a blonde male with mustache, the driver told the police officer that his brother fitted the description.

When police confronted the brother in their house, he denied knowing anything about the stolen bust. But days later on Sept. 6, Luna gave FACC President, Dr. Rufino Crisostomo, the good news that the Rizal bust was back at the center.

Dr. Crisostomo has made it his priority in the last year to solicit donations to replace the bust. Two months ago, the officers of Seafood City were holding interviews at the center for future employees for their first store in Chicago when they decided to donate a bust of Rizal.

Seafood City scheduled its grand opening on Tuesday, Sept. 13. Its officers have yet to hear from the FACC trustees on what would be their plan for the bust they donated.