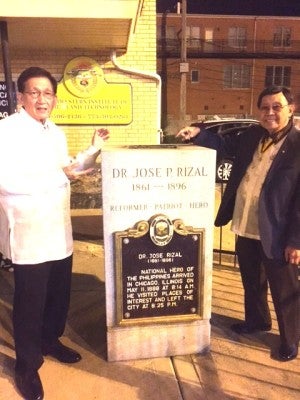 CHICAGO—The beleaguered Jose Rizal Heritage Center got a break of sorts recently, thanks to the owners of the popular grocery chain Seafood City, which is opening its first store in the Midwest next month.

In front the Rizal Center on this city’s near north side is an empty pedestal where a bust of the Philippine National Hero, Dr. Jose Rizal, used to be until June 16 last year, when it went missing. It was an apparent casualty of a raucous celebration at the nearby Wrigley Field where fans partied to mark the Chicago Blackhawks’ winning the Stanley Cup.

Despite a police report and extensive media coverage, the bust of Rizal disappeared permanently. The unfortunate incident could not have come at the worse time. The main custodian-organization of the building, the Filipino American Council of Greater Chicago (FACC), is in serious financial bind. The cost of maintaining the building cannot be met by the meager income generated from infrequent events that use the center’s facilities. 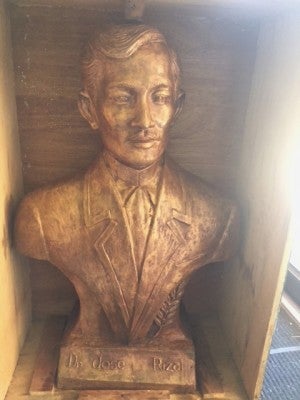 The bust of Dr. Jose Rizal donated by Seafood City to replace the one stolen last year. PINOY/ANONG SANTOS

The FACC which used to have nearly 200 Filipino American member-organizations from the Greater Chicago area now has only nine. The building was acquired in 1974 from a Swedish-American music group, which had outgrown the use of the building.

The acquisition became the rallying point for the different segments of the Filipino community to build a federation. The first-generation of Filipino immigrants dominated the leadership that mapped out the policies and the administration of both the building and the federation.

Inevitably, conflicts arose. Financial accountability and allegations of electoral fraud were two of the top reasons given by members for leaving the federation. Lawsuits were filed and legal costs weighed heavily on the FACC.

An attempt to sell the building and to buy a more suitable structure was met with opposition from the old-timers. There are also held-over officials who are seen by non-FACC members as symbols of everything that is wrong with the Rizal Center. This has kept away potential members from affiliating with the federation.

Dr. Rufino Crisostomo, the incumbent FACC president, expressed his dread of seeing himself as the president who would turn off the light switch for the last time.

Twice operated for cancer in the last three months, the retired physician from the Chicago Department of Health became despondent when sadly, his fellow officers visited him in his sick bed for the main purpose of asking him to make a cash advance to prevent utility companies from cutting off their services at the Rizal Center—“an act of charity” that he had done few times before for the center. 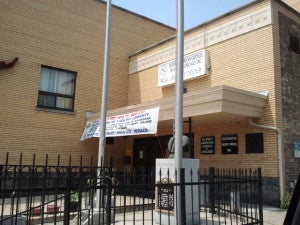 The Rizal Center in Chicago is facing financial and administrative troubles. PINOY/ANONG SANTOS

When the bust of Rizal was stolen, Dr. Crisostomo solicited donations to replace the bust. He got $600 in pledges. Potential donors were hesitant to give for fear that replacing the bust might just be a waste because of the uncertain future of the Rizal Center itself.

Enter Seafood City. Its human resources personnel leased a space at the center to hire future employees. The center’s manager, Bobby Luna, told the visiting businessmen about the stolen bust. That’s when he was told that a spare bust of Rizal was available in California. Seafood City has a bust of Rizal in each of its two stores, but a third one was not installed.

That offer benefited the Rizal Center. The Central USA Knights of Rizal is assisting in an installation ceremony–planned to coincide with the opening of the much-awaited grocery store in Chicago. In appreciation, the Knights of Rizal will make Seafood ‘s chairman, Carlos Go, an honorary member. This is all creating some excitement within the FACC.

But, will the return of the Rizal bust bring the needed rejuvenation to the ailing federation?