Praying for a Diokno in the age of Duterte 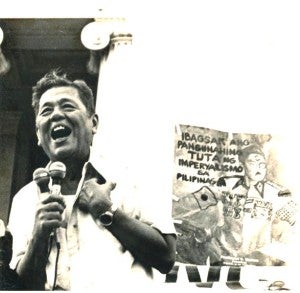 Many of us have been waiting for that leader: a Filipino president with the guts to point out the dark side of U.S.-Philippine relations.

And we’ve been waiting for an American president with the courage to admit that the so-called Philippine-American friendship was not exactly a warm and fuzzy relationship.

For that “friendship” had a bloody beginning. It began with a war, a betrayal, with Uncle Sam stabbing Filipinos in the back.

We’ve been waiting for a leader from Washington who would offer even just a hint of an apology for a long list of offenses: from the bloody U.S. colonial occupation at the turn of the 20th century to the brazen intervention in Philippine affairs after World War II to Washington’s support of a brutal dictatorship.

And we’ve been praying for a leader in Malacanang who would insist on recasting that relationship based on lessons from that painful past.

The legendary Ka Pepe, who died in 1987, led the fight not only against the Marcos regime, but also against the US meddling that enabled that dictatorship to survive and thrive.

He was the progressive leader who worked tirelessly for what he described in a famous 1984 speech: “An INDEPENDENT nation which rejects foreign dictation, depends on itself, thinks for itself, and decides for itself what the common good is, how it is to be attained, and how its costs and benefits are to be distributed.”

Diokno was the great president we never had.

Six years ago, I thought we could have another chance in recasting US-Philippine relations with the elections of Noynoy Aquino and Barack Obama.

But with Aquino, that turned out to be a misguided hope.

PNoy is no Diokno.

Yes, he deserves praise for speaking out against Beijing’s aggressive tactics in the West Philippine Sea. But he waged this fight in a way that would have made Ka Pepe cringe: he pretty much told the world that he expected Uncle Sam do a lot of the fighting for Filipinos, to be a resbak. That the Philippines can’t do it without the Americans.

He will be remembered as a great president when it comes to domestic American issues. But he’s also the US president who expanded the use of drones in warfare, causing more civilian deaths, including dozens of children in the Middle East and Central Asia.

Still, Obama also emerged as a leader who is unafraid to acknowledge America’s failings, including the dark chapters in US foreign policy.

This was evident in his recent visits to three countries just in the past few months:

But on America’s offenses in the Philippines, Obama has been disappointingly silent.

He’s the one who’s been making noise, who has turned the spotlight on the Philippines’ and the United States’ troubled history.

Finally, a Filipino president who proudly declares, ‘We are no longer an American colony,’ and who even dares remind the world of US atrocities during the Philippine American War, the conflict that many Americans don’t even know about.

And no, I’m not talking about the Digong’s penchant for cursing in Tagalog. Obama himself downplayed Duterte’s controversial comments, saying, “I think it’s just a habit, a way of speaking for him.”

What’s truly troubling about Digong’s explosive anti-imperialist rants were not his words, but the context in which he said them.

“The Philippines is not a vassal state,” Digong declared earlier this month. “We have long ceased to be a colony of the United States.”

Oh, how I and many from my generation have been waiting for a Filipino president who would make such a powerful declaration, a statement worthy of a Pepe Diokno.

Except the reason why he said what he said left many of us scratching our heads.

Duterte blew his top and blurted out that statement after a reporter asked him how we would respond if Obama raised the issue of human rights violations under his administration.

It was the reaction of a brat throwing a fit after being taunted in the playground.

This wasn’t a bold affirmation of Philippine sovereignty and independence. It was a brainless, unintelligible tantrum.

Now, to be sure, it’s great to see a Philippine president remind the world that we were once a colony of the U.S. and even highlight long forgotten American atrocities, like the Bud Dajo massacre.

But Digong has consistently failed to bring up a more recent and arguably more significant American atrocity: coddling and bankrolling the dictatorship of Ferdinand Marcos.

Why the silence on that dark chapter in U.S.-Philippine relations?

(Well, of course, we know the answer: It’s because in Digong’s eyes, the brutal tyrant that Washington embraced as an ally for 20 years is actually a “hero.”)

Duterte’s other anti-American rants have simply been comically incoherent

Like the one during the now infamous 3 a.m. press conference in Davao, when he lashed out at the United Nations for criticizing his bloody campaign against illegal drugs.

Told by reporters that the UN representative in Manila was an American, Digong angrily hit back, unleashing another incoherent verbal assault on the U.S..

“Why are you Americans killing black people there shooting them down when they are already on the ground answer that question! Because even if it’s only one or two it’s still human rights violations.”

Like I said a few weeks ago, in another context, many of us would have applauded a Philippine president speaking out against racial injustice in the US or elsewhere.

Well, not this time.

And no, it’s not because Digong capped his crazy rambling with: “Tanginang gago. Ulol!”

It’s because what he said was such a twisted, disingenuous statement.

Should we really believe that a leader who instigated a bloody witch-hunt that has killed more than 2,000 people, most of them executed without due process, really cares about human rights and racist violence against African Americans?

Yes, definitely, this is a time when we should really pray for a Pepe Diokno.

He was the genuine nationalist who understood and really made us proud of our history of fighting for independence.

Not only that. Ka Pepe also spoke out eloquently and powerfully on an important issue confronting Filipinos today.

“No cause is more worthy than the cause of human rights… they are what makes a man human,” Ka Pepe said. “Deny them and you deny man’s humanity.”

If only Duterte would also reflect on those words even as he unleashes another angry tirade against Uncle Sam.