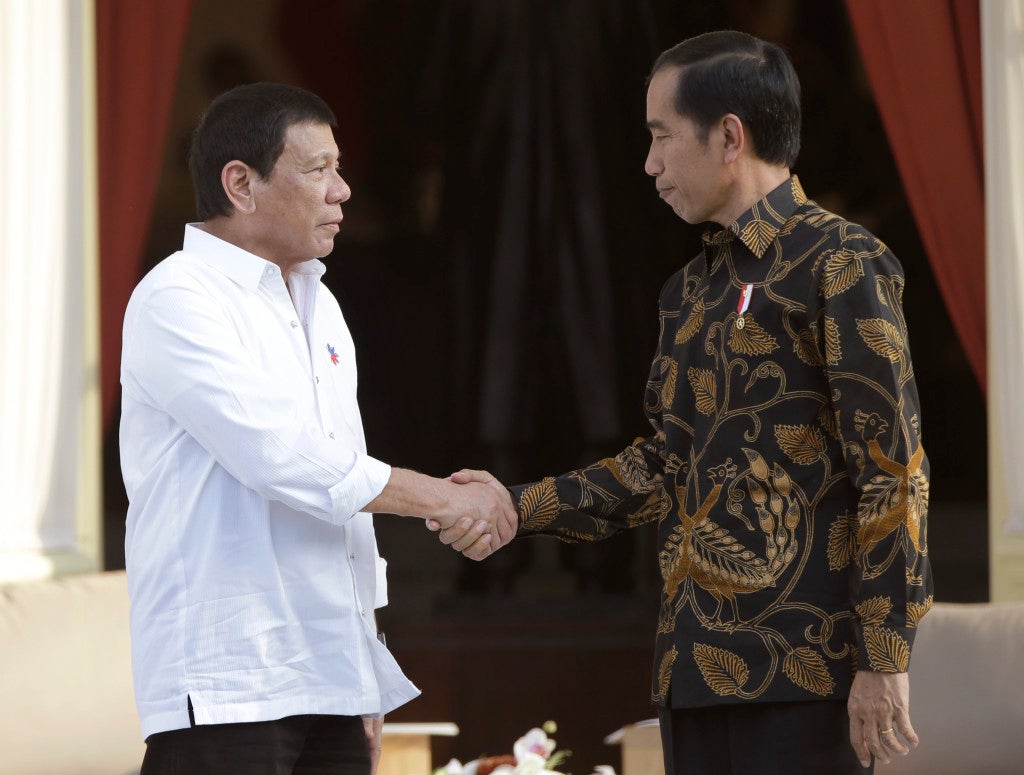 JAKARTA—The Philippines and Indonesia on Friday agreed to join forces in combating crime on the high seas, after a surge of kidnappings by Abu Sayyaf bandits in waters between the two countries.

At least 25 Indonesian sailors and a handful of Malaysians have been kidnapped this year by Abu Sayyaf bandits while traveling in the Sulu Sea between Indonesia, Malaysia and the Philippines.

The Abu Sayyaf, notorious for beheading captives whose governments fail to pay ransom, take their victims to strongholds in southern Philippines.

In a speech after his meeting with Widodo at Istana Merkada in Jakarta, Mr. Duterte said he and the Indonesian leader agreed to increase cooperation to fight piracy and kidnapping in the Sulu Sea.

“We agreed to encourage the earliest and effective implementation of cooperative frameworks to address security issues in maritime areas of common concern,” he said.

“We expressed commitment to take all necessary measures to ensure security in the Sulu Sea and maritime areas of common concern,” he said.

Mr. Duterte said he was sorry that piracy in the Sulu Sea was hampering commerce between Indonesia and the Philippines.

“I am very sorry, Mr. President (Widodo), that sometimes the shipments of even the coal that is needed by the power plants of my country are hampered when crossing that area there because there is a lot of piracy,” he said.

Mr. Duterte said the agreement on maritime security cooperation would also be signed with Malaysia.

“We hope that there will be no more security issues in the Sulu Sea in the future, and we will conduct joint patrols to ensure security,” Widodo said, hailing the neighbors’ “cooperation in guaranteeing security in the Sulu Sea.”

Talking to a group of Filipinos in Jakarta earlier on Friday, Mr. Duterte said the agreement would allow Indonesia’s Navy and Coast Guard to continue “hot pursuit” of pirates into Philippine waters.

“If you are a pirate, you can be arrested by any nation because piracy is a crime against humanity. If the chase began in Indonesia here, then crosses, the chase continues in the international waters and if they are really fast enough also, inside now the Philippine waters, they can go ahead and blast them off. That’s the agreement. Blow them up,” he said.

But if the pirates have a hostage, Mr. Duterte suggested that the Indonesians arrest the pirates first and kill them later.

“Just feed them to the sharks…it would make them fat, good for sashimi also,” he said.

He later clarified his statements in a talk with reporters.

“Entering the Philippine waters, we have agreed really to just coordinate and if there is a pursuit, in the meantime, they can radio or call our forces nearby to take over because we are entering your jurisdiction,” he said.

Aside from maritime security and  law enforcement, the Philippines and Indonesia also agreed to broaden their cooperation in fisheries and aquatic resources, shipbuilding and air and sea services.

“We called on parties to respect the rule of law and welcomed the support of partners in efforts to ensure security and stability in the region, especially in the peaceful settlement of disputes, in accordance with international law,” he said.

Mr. Duterte expressed his gratitude for Indonesia’s support in ending the secessionist movement in Mindanao with the revival of peace talks with the Moro Islamic Liberation Front and Moro National Liberation Front.

He said he and Widodo also agreed to work together in going after terrorists and illegal drugs. With reports from AFP and AP/TVJ

Duterte, Widodo agree on case of Indonesians with PH passports