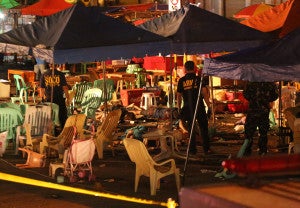 Philippine police officers stand beside bodies of victims after an explosion at a night market that has left 14 people dead and wounded several others in southern Davao city, Philippines late Friday Sept. 2, 2016. AP

MANILA — The declaration of a state of lawlessness following a deadly blast in the President’s hometown poses “limited” impact on the country’s investment grade status thus far, although debt watcher Moody’s Investors Service said any “prolonged uncertainty” on the peace and order front might deter investors.

In a report Wednesday, Moody’s senior credit officer Christian de Guzman noted the Sept. 2 bombing in Davao City that prompted President Rodrigo R. Duterte to issue the declaration, which “allows for heightened security measures, including the stepped-up deployment of soldiers and policemen in key areas.”

“The near-term sovereign credit impact of these developments is limited as we do not expect them to change economic and fiscal policies or outcomes,” de Guzman said.

“However, if recent events lead to prolonged uncertainty around security or economic policy, such a development would eventually dampen business confidence and, consequently, economic outcomes,” De Guzman added.

Moody’s noted that the robust 6.9-percent economic growth in the first half was “a stronger performance than similarly rated peers.”

“We do not expect recent events to meaningfully derail this economic momentum,” de Guzman said.

Moody’s also noted that Mindanao, even while being the home to almost a fourth of the Philippine population, composed only 14.8 percent of the gross domestic product (GDP) last year as well as accounted for only 0.8 percentage point of the 5.9-percent real GDP growth.

“At this stage and, as long as the interventions under the state of lawlessness do not affect businesses nationwide, we assume that investment decisions will not be materially affected,” De Guzman said.

Also, De Guzman added that they “do not expect any shifts in economic policy stemming from last weekend’s developments.”

“They reinforce the administration’s call for increased defense and security expenditure in the ongoing deliberations for the 2017 budget, including a 24.5-percent rise in allocations for the police to 3.3 percent of total expenditure from 3.0 percent in the 2016 budget,” De Guzman said.

Moody’s nonetheless cautioned about the President’s “controversial” policies, including the war on drugs.

“President Duterte’s increasingly controversial law and order policies could exact an opportunity cost for reform. Following his victory in May’s presidential election, he has garnered high approval ratings and substantial support in Congress. More recently, the president has deployed his considerable political capital in defense of his campaign on drugs and has engaged key legislators in highly publicized disputes, which—if protracted—could detract attention from the implementation of important economic reforms,” de Guzman said.

“We have assessed the Philippines’ susceptibility to political risks as low. We do not believe that a significant intensification of the security response—such as an imposition of martial law, which requires congressional approval—is likely, given the current system of checks and balances. In particular, the government has stated that the declaration of state of lawlessness calls for a stepped-up security presence without a suspension of civil liberties,” according to de Guzman.

“The main challenge facing Philippine policymakers is sustaining the positive trajectory of institutional quality through the political cycle,” De Guzman said, citing the improvement of institutional strength indicators since 2011.

“Should this improvement continue in conjunction with robust economic and fiscal performance, it would support positive momentum in the sovereign credit profile. However, in the event of greater uncertainty about policies and policy effectiveness, the economic outlook would become clouded, capping any positive momentum,” De Guzman said.  SFM