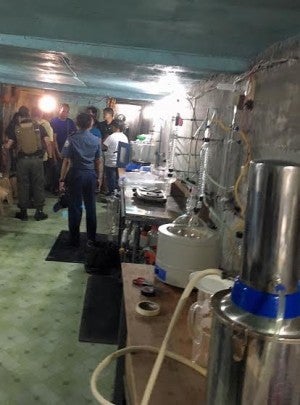 The police uncovered a suspected shabu laboratory beneath a piggery warehouse in the remote village of Balitucan in Pampanga’s Magalang town on Wednesday (Sept. 7). Photo by Tonette Orejas/ INQUIRER CENTRAL LUZON)

MAGALANG, Pampanga — Police said P2 million worth of shabu (methamphetamine hydrochloride and P4 million worth of equipment were seized from a laboratory operating inside a piggery farm at a village here.

The laboratory, hidden beneath a warehouse in Barangay (village) Balitucan, was shut down in a Wednesday (Sept. 7) morning raid by the police and agents of the Philippine Drug Enforcement Agency (PDEA).

The police detained seven Chinese nationals who were at the compound.  They were identified as Luey Wang, Philip Chang, Wang Shi Xu, Alvin Wang who also used the name James, Xiao Po, Sonny Si, and a woman who identified herself as Susan.

The operation was led by Wilkins Villanueva, PDEA director for the National Capital Region, who said the Magalang laboratory was part of a network of five facilities that have been supplying drugs in Luzon.

The piggery, which has been raising 2,000 pigs, emitted a stench that concealed the odor of chemicals used to produce shabu, police said.  SFM