VIENTIANE—With the sleeves of his barong tagalog rolled up and hands in pant pockets, a contrite President Duterte debuted on Tuesday at the annual Asean summit overshadowed by his “putang ina” remark directed at US President Barack Obama.

Mr. Duterte’s “son of a bitch” remark prompted the White House to cancel his meeting with Obama on Tuesday.

Other male leaders of the Association of Southeast Asian Nations (Asean) were dressed in business suits at the National Convention Center in the Laotian capital of Vientiane. Mr. Duterte rolled his sleeves down and buttoned them in the way the shirt is worn on formal occasions when Laotian President Bounnhang Vorachith gave a speech to open the summit.

In a statement earlier read by presidential spokesperson Ernesto Abella, Mr. Duterte expressed “regret” for expletive-laden remarks he made on Monday before he departed Davao City for the summit.

“While the immediate cause was my strong comments to certain press questions that elicited concern and distress, we also regret it came across as a personal attack on the US President,” the President said.

“Our primary intention is to chart an independent foreign policy while promoting closer ties with all nations, especially the United States with which we have had a long standing partnership,” he said.

“President Duterte explained that the press reports that President Obama would ‘lecture’ him on extrajudicial killings led to his strong comments, which in turn elicited concern,” the Philippine government said in one statement.

“He (President Duterte) regrets that his remarks to the press have caused much controversy,” it added.

“He expressed his deep regard and affinity for President Obama and for the enduring partnership between our nations.”

“Don’t put meaning to that. That’s just his style. It’s just a hyperbole,” Panelo told reporters. “It’s just an expression. I don’t think it was directed to President Obama.”

In a separate statement, Presidential Communications Secretary Martin Andanar said Mr. Duterte wanted to reassure the United States that his administration “continues to value the alliance” between the two countries.

In his opening address, the Laotian president outlined “multifaceted security challenges” in many parts of the world—such as terrorism and extremism, natural disasters, climate change, migration crisis, trafficking in people, territorial disputes and armed conflicts.

“At the same time, although the global economy has gradually recovered, growth remains slow and fragile,” he said. “There is a need for us to closely follow these developments and continue to enhance Asean cooperation and collaboration with the international community.”

The summit will be followed by a series of other meetings on Wednesday and a summit on Thursday between leaders from Asean and other countries, including the United States, China, Russia, India, South Korea, Japan, Australia and New Zealand.

Obama arrived in Vientiane on Monday night and will attend Thursday’s summit.

Mr. Duterte also arrived on Monday night. But hours earlier, he dropped a diplomatic bombshell by saying he doesn’t want Obama to ask him questions about extrajudicial killings that have occurred amid an ongoing crackdown on drug dealers in the Philippines. More than 2,000 people have been killed in the crackdown since he took office on June 30.

In his typical loose-tongued style, Mr. Duterte said: “I do not have any master except the Filipino people, nobody but nobody. You must be respectful. Do not just throw questions. Putang ina, I will swear at you in that forum,” he said, using the Tagalog phrase for “son of a bitch.”

On Tuesday, Mr. Duterte expressed regret over the remarks, but the damage was already done.

“Schedules are tight, but there are still occasions for the two leaders to meet here in Laos during the Asean summit. We’re working for that to happen,” Jose said in a text message on Tuesday to the Inquirer.

The shoal is part of the larger dispute in the South China Sea between China and some Asean countries. An international arbitration panel recently ruled that China’s expansive claims in the sea are illegal. Beijing has rejected the ruling as a sham.

Although Asean has the power of the ruling behind it, its summit is unlikely to mention it in its final declaration, a reflection of Beijing’s diplomatic clout. 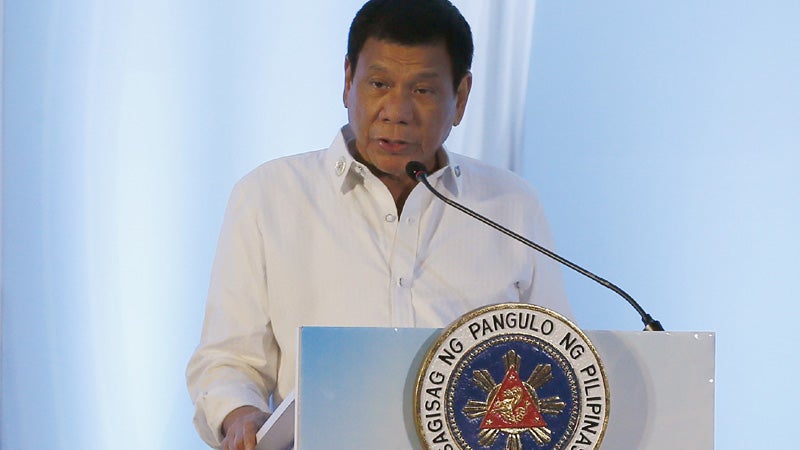 But according to a draft of the final statement Asean is scheduled to release on Thursday, the region’s leaders will express strong concern about Beijing’s construction of man-made islands in the South China Sea, which Southeast Asian countries fear could destabilize the region.

Mr. Duterte said last week that the Philippine Coast Guard had sighted Chinese barges at Scarborough, which he said could presage the transformation of the Chinese-held reef into another man-made island. One of the Chinese vessels had what appeared to be a crane, according to a Philippine official.

China sparked widespread alarm when it converted seven reefs in the Spratly Islands into islands that the United States says could be transformed into military bases. With reports from AP and Estrella Torres in Manila