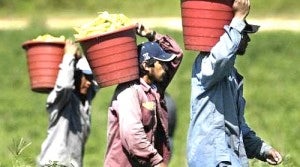 SAN FRANCISCO — After decades of pushing for fair pay, California farm workers will finally be paid overtime when they work more than eight hours a day — if Gov. Jerry Brown signs a bill that is now on his desk.

AB 1066, authored by Assemblywoman Lorena Gonzales, D-San Diego, will give fair pay to the state’s estimated 825,000 farm laborers who “ensure that we have fruit, vegetables and wine on our tables,” said Arturo Rodriguez, president of the United Farm Workers of America, which sponsored the measure. The law will be phased-in over four years, starting in 2019.

“Today, every single worker who touches our food – from the driver, to the cook to the waiter – gets overtime after eight hours, everyone, that is, except for the farm worker who picked the food,” said the bill’s co-author Assemblymember Rob Bonta, Dem-Oakland, in a press release. “Under current law, we are sending a message to our farm workers that they are different (from) other workers, that their work is less valuable than other workers.”

The California Assembly passed the bill 44 to 32 on Monday, Aug. 29, after a lively debate. More than 100 farm workers cheered as they watched the debate on a livestream feed outside the Assembly room.

Opponents of the bill, many from agricultural regions of the state, said it would increase costs for farmers and could lead to unfair hiring practices. Supporters, meanwhile, characterized it as a human rights issue. Assemblymember Tony Thurmond, D-Richmond, said it was about giving farm workers “a fair day’s pay for a fair day’s work.”

A 2010 effort to give farm workers a fair shake in overtime wages was vetoed by former Gov. Arnold Schwarzenegger.

Existing law sets wage, hour, meal break requirements and other working conditions for employees. It also requires an employer to pay overtime wages as specified to an employee who works in excess of a workday or workweek, and imposes criminal penalties for the violation of these requirements.

Agricultural employees are exempt from these requirements. They currently receive overtime pay after 10 hours and don’t have a 40-hour workweek.

Beginning January 1, 2022, the bill would require any work performed by a person in an agricultural occupation, to be paid double their regular rate if they were over 12 hours in one day.

Last week, Bonta and two members of his staff observed a 24-hour fast to support the bill. The bill is particularly important to Bonta, who was raised in La Paz, Calif., the headquarters of the United Farm Workers (UFW), where his parents organized Filipino American and Mexican American farmworkers. Bonta is the godson of José Gomez, who was the executive assistant to Cesar Chavez.