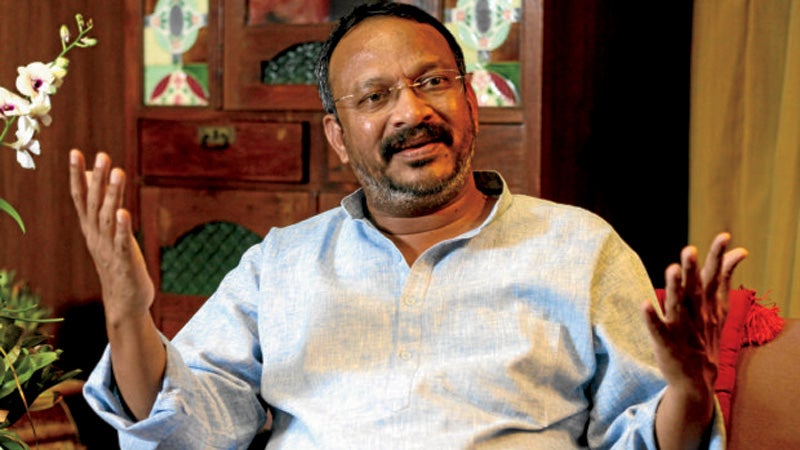 ONE NIGHT three decades ago, Indian human rights activist Bezwada Wilson saw himself weeping silently on an abandoned water tower and grappling with his thoughts, the events of the day playing over and over in his mind.

He had tailed to work earlier that day members of a scavenging colony in his hometown in Kolar Gold Fields, Karnataka in southern India, to find out why they told him that their job compelled them to drink alcohol every day.

He saw them performing the foulest and most dehumanizing form of labor: men and women scraping human waste from dry latrines of upper caste households, putting them in baskets that they carry on their head to a tanker tractor, which will later dispose of the undesirable load to the town’s outskirts.

Wilson, then 20, started wailing and begging the workers to stop what they were doing when some of the cleaners jumped into a soak pit filled with human excreta to save a bucket that accidentally fell into it. But they just told him to let them finish their job.

“I said, ‘It can’t be work. How can it be work? This is not work, you come out,’” the 50-year-old Ramon Magsaysay awardee recounted to the Inquirer.

The cleaners stopped for a few hours to listen to his thoughts but still went back to work afterward.

On the water tower later, Wilson contemplated suicide but eventually decided against it.

“I could have jumped anytime but I told myself: ‘This is not the way. Let us go to the world. Whatever is going to happen, let the world decide,’” he said.

In a land where the “dalits,” or untouchables, like him are shackled in silence to the dirtiest job in the world to make a living, Wilson defied fate and in doing so, won many battles in his mission to liberate outcasts from the hereditary occupation of manual scavenging.

Seven years after that fateful day, emboldened by moral outrage and the ideologies of social reformer and main architect of India’s Constitution B.R. Ambedkar, Wilson helped found the Safai Karmachari Andolan (SKA), a movement to eradicate manual scavenging in India.

Today, SKA is a strong network of 7,000 members and volunteers from the “safai karmachari” (sanitation worker) households in 25 states and 500 districts across India.

Of the roughly 600,000 manual scavengers cleaning the 790,000 public and private dry toilets across India, the movement has so far set free 300,000—now earning from driving rickshaws, rearing goats and selling vegetables, clothes and buffalo milk, among other modest and humane jobs.

The Ramon Magsaysay Foundation chose Wilson in recognition of his “moral energy and prodigious skill in leading a grass roots movement to eradicate the degrading servitude of manual scavenging in India, reclaiming for the dalits the human dignity that is their natural birthright.”

During the awarding ceremony at the Cultural Center of the Philippines on Wednesday, Wilson dedicated the award to the women who burned their baskets to symbolically reject manual scavenging and to those who died and continue to risk their lives cleaning India’s sewer lines.

In 1993, a law was enacted prohibiting the construction of dry latrines (or toilets that do not flush) and the employment of manual scavengers.

It has been updated with a more stringent act in 2013, which expanded the definition of manual scavenging to include the cleaners of railway tracks, open drains, sewer lines and septic tanks and included the rehabilitation of these workers.

Despite these laws, manual scavenging still persisted in many areas in the country, especially in poorer states with the government as the primary violator.

“Our voice that nobody is hearing has just gone up one level with this award. People are now coming to ask us what is our movement about,” Wilson said in an interview.

The award, Asia’s equivalent of the Nobel Prize, has also created a safety network for the movement to pursue its human rights struggle without fear, knowing that their Asian neighbors were walking with them, he said.

“Sometimes our government doesn’t take us seriously, but now it is hard for them to ignore us … this really gives us courage,” he said.

Wilson was born to a dalit family but his parents, who secretly cleaned human waste for a living, strived to give him higher education so he can be spared from the centuries-old caste-based occupation.

His mother had also been warned in a dream that he should not be made to practice this form of labor at any cost, he said. Wilson earned his political science degree in 1990 from Dr. B.R. Ambedkar Open University in Hyderabad.

When he finished secondary school in Kolar district, he got involved in social work in his community, helping children finish school and get vocational training so they won’t end up cleaning human waste for the rest of their lives.

It was during this time that he followed a group of sweepers to witness how their job was driving them to become alcoholics and from there, decided to start his crusade.

Wilson scored his first victory in his long battle against manual scavenging in his hometown in 1986, when all the dry toilets in the town were converted into water-sealed latrines and the scavengers reassigned to other jobs.

The shift transpired after he had written local authorities a complaint about dry latrines and then later elevated it to the prime minister with a threat of legal action when he was ignored.

He also started his movement at home, changing the outlook of his family and relatives that being a dalit was not their destiny but merely a product of centuries of social mind-conditioning and that no human being should be cleaning up another’s waste for any reason.

After bringing his campaign to other states and working with dalit activists and volunteers, it snowballed into a people’s movement that was formally launched as SKA in 1993.

The launch coincided with Wilson’s filing of a public interest litigation case in India’s Supreme Court naming various government departments, all states and union territories as violators of the 1993 law.

SKA won the 20-year-old legal battle, with the high court ordering the government in 2014 to pay the families of those who have died cleaning the sewers or septic tanks after 1993 the amount of 1 million Indian rupees (over $14,000).

Through the years, Wilson has steered SKA to many mobilizations and meetings with state officials to lobby for the demolition of dry latrines and provision of alternative jobs for the scavengers, mostly women.

Read Next
PH concerned over Chinese boats near Scarborough Shoal
EDITORS' PICK
Look Through: The fate of impounded stray dogs
What to watch out for when selecting a video surveillance solution
Unleash the photographer in you this World Photography Day with vivo smartphones
Palace warns sugar hoarders after raid on Pampanga warehouse
Metro Manila’s COVID-19 cases on downward trend, but surge not over — OCTA
House energy committee chair Arroyo bats for cheap electricity
MOST READ
Man abducted in Batangas gasoline station, found dead in Quezon
Jordan Clarkson’s Gilas supporting cast loaded with height, experience
WATCH: Rick Astley re-creates ‘Never Gonna Give You Up’ music video 35 years later
Alice Dixson to critics of her yellow gown at GMA Gala: ‘’Wag masyadong judgmental’
Don't miss out on the latest news and information.