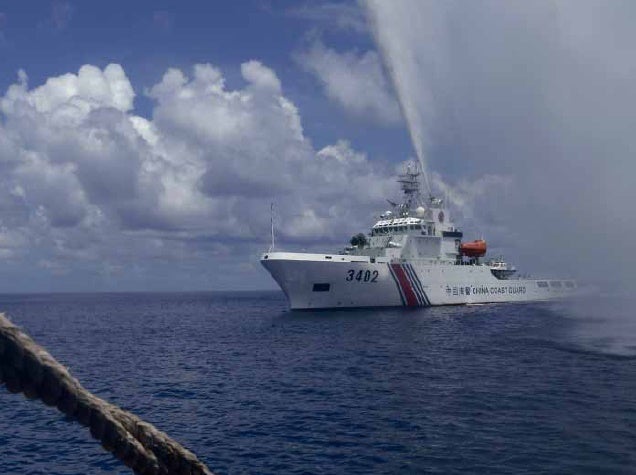 The Philippines has asked China to explain the increased presence of Chinese vessels near the disputed Scarborough Shoal in the South China Sea, the defense secretary said Sunday, expressing “grave concern.”

“The presence of so many ships, other than coast guard in the area is cause for grave concern,” Lorenzana said.

“The DFA (Department of Foreign Affairs) has  already called the attention of the Chinese Ambassador and demanded an explanation,” he added.

The shoal, which is located just 230 kilometers (650 miles) from the main Philippine island of Luzon, has long been a bone of contention between the two countries.

Lorenzana said that earlier this year, the Chinese tried to bring in dredging barges in an apparent attempt to turn  Scarborough into an artificial island but were dissuaded by the United States.

“If they try to construct anything in Scarborough it will have far reaching adverse effect on the security situation,” he added.

The Chinese Embassy in Manila could not be reached for comment.

President Rodrigo Duterte has said he intends to ask Beijing — possibly at a regional summit in Laos this week — if they are building up the shoal despite an international court ruling rejecting most of China’s claims in the resource-rich area.

Duterte said Friday he had received an “unsettling” intelligence report showing China had sent barges to the contested Scarborough Shoal and had appeared to begin construction in the area for the first time.

A UN-backed tribunal ruled in July that China’s claims to almost all of the strategic sea had no legal basis and its construction of artificial islands in disputed waters was illegal.

The United States has warned of “actions” if Beijing extends its military expansion to the Scarborough Shoal.

China has sought to assert its claims in the South China Sea by building a network of artificial islands capable of supporting military operations.

Its massive land reclamation has prompted criticism from the US and claimant countries, with Washington warning it endangers freedom of navigation in international waters.

Vietnam, Malaysia, Brunei and Taiwan also have claims to the sea, through which over $5 trillion in annual trade passes.

The Scarborough Shoal, a rich fishing ground within the Philippines’ exclusive economic zone and 650 kilometers away from the nearest major Chinese landmass, is a particular flashpoint.

China took control of Scarborough Shoal in 2012 after a stand-off with the Philippine Navy.

Duterte, who took office in June,  earlier vowed to mend ties with China after his predecessor Benigno Aquino angered Beijing by filing the arbitration case in 2013./rga

Duterte alarmed by reports of Chinese barges in Panatag Shoal