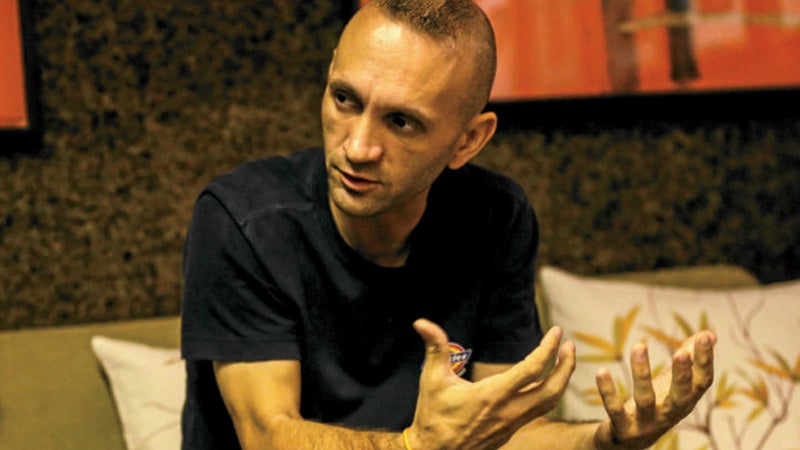 PARAMEDIC Sebastian Perret and his Vientiane Rescue group respond to at most 30 emergency or life threatening cases a day. LYN RILLON

VIENTIANE Rescue practically started with nothing but the desire to save lives.

What began as a free ambulance service, using just one car with seven people, mostly teenagers, is now a group of 200 volunteers rendering rescue services for any form of life-threatening situation at the Lao capital and nearby towns.

When Sebastien Perret, a trained paramedic and firefighter, first suggested in 2010 a free ambulance service in Vientiane, the nongovernment organization he worked for said it was “impossible.”

At the Lao People’s Democratic Republic, a surge in the number of motor vehicles ushered by prosperity in the capital raised road fatality rates in the absence of traffic safety education, strict driver licensing requirements and emergency response services.

From 2011 to 2015, Vientiane Rescue helped saved as many as 10,000 people, and this achievement won for the group a Ramon Magsaysay Award.

The  Ramon Magsaysay Foundation noted the group’s “heroic work in saving Laotian lives in a time and place of great need, under the most deprived of circumstances, inspiring by their passionate humanitarianism a similar generosity in many others.”

“We started with seven guys, five 15-year-olds, with nothing and it’s working. We now have 200 volunteers, 10 ambulances, a fire truck, a scuba diving rescue team, a hydraulic rescue team, from nothing,” Perret told the Inquirer at the Ramon Magsaysay Center in Manila.

“It was a 24/7 ambulance service without sponsorship, without training, without gasoline and without equipment. It would be suicide in any other country but there were no ambulance services, no public ambulances,” he said.

Perret said his resolve to form the group firmed up when he witnessed an accident near a hospital in the capital in 2010.

“Two guys on a motorcycle were hit by a truck. They were bleeding (on the street). I knew there was no ambulance service at the time and I was really surprised that there were no ambulances coming from the hospital when it was so close,” he recalled.

He suggested to the people he was working for in an NGO to open an ambulance service. “They said it was ‘impossible.’ Then, I met the volunteers and we tried,” he said.

From 2010 to 2012, Vientiane Rescue made do with what it had, recycling bandages and reusing a single cervical collar and the few volunteers working up to 168 hours a week.

“We started little by little and then in 2012, we lost our ambulance. So we closed our service for one year and when we started again in 2013. We had nothing left,” Perret said.

Vientiane Rescue received a donation of $6,000 to buy an old car, which was refurbished and converted into an ambulance.

Perret said the motivation to improve and professionalize the team came from one incident in 2013 when a crash victim he was administering first aid to died because of lack of equipment.

“There were two guys who were hit by a truck (head-on) at high speed. You can imagine the shape of the guys. So we took care of them. I kept on talking to one of them who lost consciousness. So we put him on some oxygen then he stopped breathing,” he said.

He said he started CPR (cardiopulmonary resuscitation). “Blood came out of his mouth and we did not have enough money to buy equipment to handle that. Basically, he died because nobody was sponsoring our service. It was really hard.”

These days, he said, “we have pretty much all the equipment we need. We are in much better shape than before.”

He attributed the existence of Vientiane Rescue to the volunteers, who “give their time, energy, money to sustain our service.”

They previously chipped in to continue the free ambulance service but are now receiving donations, albeit not too much, according to Perret.

“Our volunteers are so dedicated. They give everything. I mean it’s raining, they’re covered (in) blood and they don’t care. They do it,” Perret said.

He narrated an incident when scuba diving training was introduced into Vientiane Rescue and there were many who volunteered, wanting to learn and lining up at the swimming pool.

“We told them to jump (into the water) and they jumped and started to sink to the bottom so they had to be taken back up. We asked them, ‘Do you know how to swim?’ and they said ‘No.’ ‘Why did you jump?’ and they said, ‘Because you said so.’”

“So you can just imagine the level of commitment of these guys. They’re unbelievable,” Perret said, smiling in recollection. He added that the volunteers were working 140 hours a week and most of them going home a few hours in a month to say hello to their families.

Vientiane Rescue responds to 10 to 30 emergency or life-threatening cases a day.

“We do everything because there is no emergency service in Vientiane … . We can manage. We try to manage,” Perret said.

Volunteer Bounmy Khamuongsa said, “We are called for everything, even to fix flat tires.”

Perret pointed out that the level of trust was that high for the emergency service. “That’s the most important thing. That’s why we do it.”

Vientiane Rescue basically grew by word of mouth. The capital has around 800,000 people who practically spread the word, either literally or through social media.

“We never had any criticism because we are careful about what we do, the way we do it. Our volunteers have strict rules they have to follow,” Perret said.

Volunteers are very young, mostly in the early 20s with the youngest only 12 years old.

Asked why people volunteer, Perret said: “It’s because they want to learn how to help people. Because it (Vientiane Rescue) is  family. There is really something special. We take care of each other the way a family does.”

Emergency rescue groups in other countries have brand-new suits and high-level of training and are called heroes, he said.

“Our volunteers, they have second-hand suits so they can go into fires. We do not have any money. We cannot give them everything. What can we call them?  They are amazing,” Perret said, beaming.