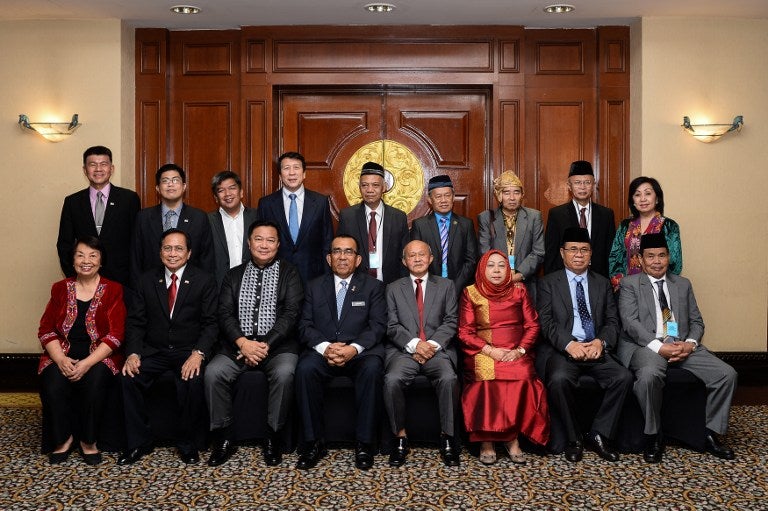 Participants in the peace talks process between the Philippine government and the Moro Islamic Liberation Front pose for pictures prior to their meeting at a hotel in Kuala Lumpur on Aug. 13. Malaysian diplomat Tengku Dato Abd Ghafar Tengku Mohamed (front row, fifth from left), who facilitated the final stretch of the negotiations which led to the forging of the landmark Comprehensive Agreement on the Bangsamoro, passed away on Friday. AFP

The talks led to the forging of the landmark Comprehensive Agreement on the Bangsamoro (CAB).

His last act as facilitator was to preside, together with Presidential Peace Adviser Jesus Dureza, in the launching in Kuala Lumpur last Aug. 13 of the implementing phase of the Bangsamoro peace agreements.

The last document he signed for the Bangsamoro peace process was the joint statement issued by the parties on Aug. 14.

In April 2011, Tengku took over from another high-ranking Malaysian official, Datuk Othman Abdul Razak, the facilitation of the negotiations.

In a statement, Dureza described Tengku as “a guiding star and leading light in our work for peace with the Bangsamoro.”

“We mourn his passing as we also celebrate his valuable contributions to our continuing work for peace in the land. I know that he had to finish his task first and now that it is done, he begs leave and quietly passes into the night,” Dureza added.

Deles said Tengku “played a crucial role in rebuilding the trust between the two parties and among the partners of the process.”

She added that Tengku was “always conscious and respectful of each party’s bottomline, while helping the parties to find ways to bridge the divides and navigate and expand the common grounds for consensus.”

“Under his watch, the ceasefire held and grew robust mechanisms, even following the tragedy in Mamasapano,” Deles said.

In another Facebook post, former government panel secretariat head Iona Jalijali said that more than being the facilitator of the negotiations, Tengku has “through the years … [become] like an uncle or grandfather to me and many others involved in the talks.”

“I regret not being able to say ‘thank you’ or ‘goodbye.’ I will miss his wisdom and quiet strength, and even his incessant teasing. May his soul rest in eternal peace,” Jalijali added.