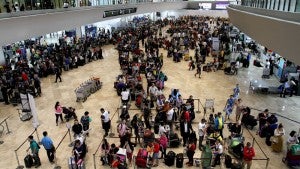 Chinese Wu Hong Sheng, 33, of Fujian, reportedly attempted to escape detection by passing off two large boxes of the contraband, which were among his baggage, as ready-to-wear apparel, bags and shoes.

Wu has been turned over to the Customs legal division for the filing of charges of violation of Republic Act 8484 or the Access Devices Regulation Act of 1998, said Customs deputy commissioner for enforcement Arnel Alcaraz.

Alcaraz said that they were able to intercept Wu Hong Sheng, 33, after they received a tip that a passenger of a flight from Guangzhou planned to smuggle in access devices into the country.  “We never got a name and only got a flight number,” he said.

Wu and his illegal cargo were intercepted by customs officials around 8 a.m. Wednesday after he arrived on a Philippine Airline flight 383 at the NAIA Terminal 2.

Alcaraz pointed out that as early as Tuesday, he met with Customs x-ray operatives and personnel of the enforcement and security services to watch for a passenger on the flight from Guangzhou who was carrying stolen credit cards, skimming gadgets and other illegal access devices.

“We got 38 boxes of electronic items from him. There are hundreds of stolen credit cards on him, most of them bore the names of Chinese owners,” Alcaraz told the Philippine Daily Inquirer, adding that Wu has been turned over to the Customs legal division for the filing of charges of violation of Republic Act 8484 or the Access Devices Regulation Act of 1998.

The Customs deputy commissioner said Wu might be connected with another Chinese national who was intercepted last week at the Laoag International Airport for carrying gadgets used in cybercrime and bank fraud.

“We are looking into the suspect’s flight history, how many times he has been in and out of the country. We are cross-referencing this with records in the other airports,” Alcaraz said, adding that they have started working to identify Wu’s contact.

The Bureau of Customs is coordinating with the National Bureau of Investigation for a thorough investigation of the smuggling try.  SFM