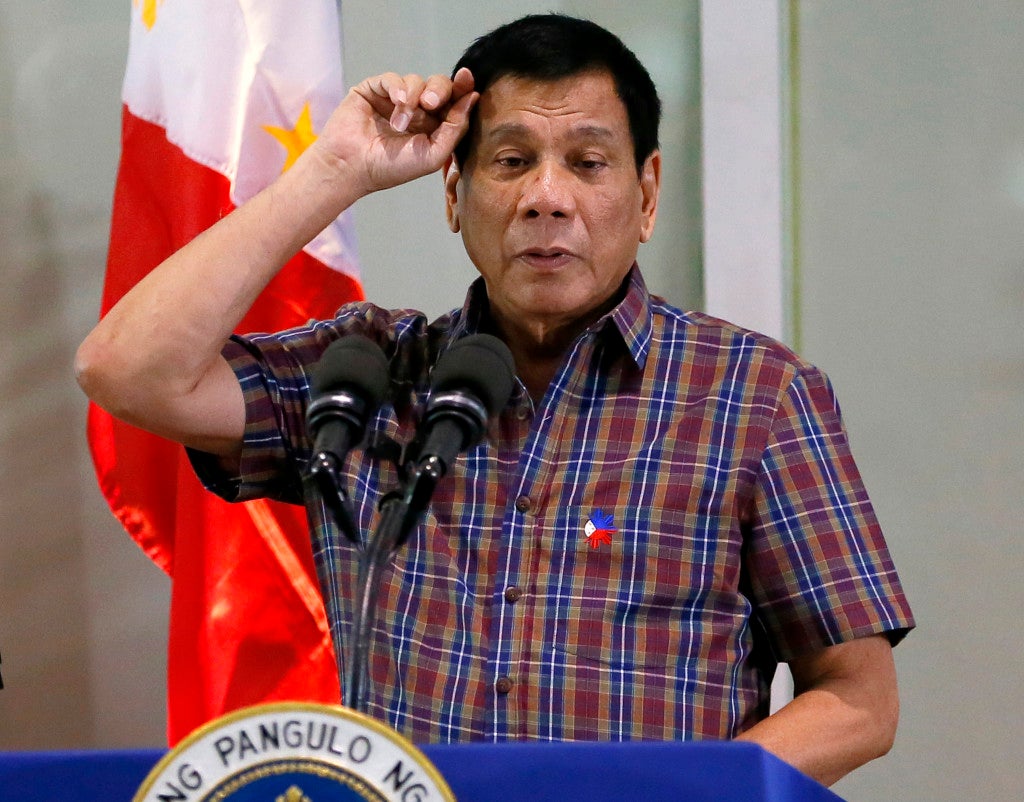 President Rodrigo Duterte gestures as he addresses Overseas Filipino Workers who were repatriated back to the country Wednesday, Aug. 31, 2016 at the Ninoy Aquino International Airport in suburban Pasay city south of Manila, Philippines. The Philippine president says he is ready to discuss with U.S. President Barack Obama on the sidelines of the ASEAN summit next week in Laos, his bloody anti-drugs campaign, which has sparked Washington’s concerns as the body count in the crackdown climbed alarmingly. AP

MANILA, Philippines — Philippine President Rodrigo Duterte said Wednesday he was ready to defend his bloody crackdown on illegal drugs, which has sparked US and international concerns, with President Barack Obama on the sidelines of an Asian summit next week.

Duterte said he would demand that he be allowed to first explain the context of his crackdown before engaging Obama in a discussion of the widespread deaths. The two will meet for the first time on the sidelines of the annual summit of the Association of Southeast Asian Nations and Western leaders in Laos.

Nearly 1,800 suspected drug dealers and users have been killed since July 1, and US Deputy National Security Adviser Ben Rhodes said in Washington Monday that Obama plans to raise US concerns over the killings with Duterte.

“They must understand the problem first before we talk about human rights,” Duterte told a news conference. “I would insist, ‘Listen to me. This is what the problem is.’ Then we can talk. No problem.”

Speaking at Manila’s international airport, Duterte warned more than 120 Filipino workers who returned after they were laid off in Saudi Arabia to stay away from illegal drugs.

“Avoid drugs at all costs because it could cost your life too,” Duterte said, adding that more than 3 million Filipinos are drug addicts.

Criticism by the US government, UN rights experts and human rights groups over the drugs killings have provoked angry outbursts from Duterte, who, at one point, threatened to withdraw the Philippines from the UN.

READ: Duterte: I am ready to talk to Obama

Duterte said that the world body and the US have failed to prevent genocidal killings in Africa and the Middle East but criticize his crackdown, which targets hardcore criminals who destroy Philippine society.

The US has expressed concern over the extrajudicial killings and urged Duterte’s government to ensure law enforcement efforts comply with human rights obligations.

“We are concerned by these detentions, as well as the extrajudicial killings of individuals suspected to be involved in drug activity in the Philippines,” US State Department spokeswoman Elizabeth Trudeau said. “We strongly urge the Philippines to ensure its law enforcement efforts comply with its human rights obligations.”

Duterte has had an uneasy relationship with America and has said he will chart a foreign policy that is not dependent on the US, his country’s longtime treaty ally. Duterte has also tried to repair relations with China that have been strained over escalating territorial disputes in the South China Sea.