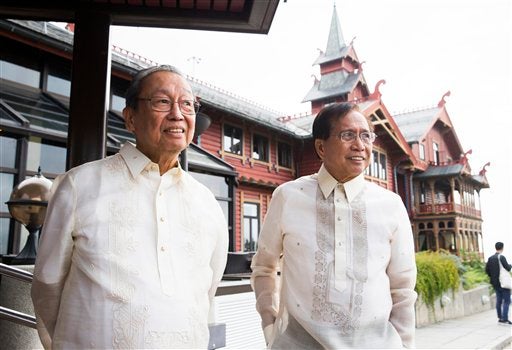 At the start of Philippine peace negotiations hosted by Norway government, Monday Aug. 22, 2016, in Oslo, Norway, with Jose Maria Sison of NDFP, left, and Philippine peace minister Jesus Dureza, as Philippine government officials and rebels participate in the peace negotiations. Norwegian officials opened a new round of peace talks between the government of Philippine President Rodrigo Duterte and communist rebel members of National Democratic Front of the Philippines (NDFP) aimed at ending one of Asia’s longest-running rebellions that has killed an estimated 150,000 people. (Berit Roald / NTB scanpix via AP)

OSLO, Norway—The Philippine government and Communist guerrillas have agreed an indefinite extension to a ceasefire to facilitate talks on a peace deal, Norway, which is playing the role of intermediary, announced Friday.

“Representatives of the Philippine government and the National Democratic Front (NDF) Communist movement will sign on Friday August 26, at 11:00 am (0900 GMT), a joint declaration in which the two sides commit to unilateral ceasefires without a limitation in time,” the Norwegian foreign ministry said.

Norway is playing the role of go-between in the talks, which aim at ending one of Asia’s longest-running insurgencies.

The Communist Party of the Philippines launched a rebellion in 1968 that has so far claimed the lives of 30,000 people, according to official estimates.

Its armed faction, the New People’s Army (NPA), is now believed to have fewer than 4,000 gunmen, down from a peak of 26,000 in the 1980s, when a bloodless revolt ended the 20-year dictatorship of late President Ferdinand Marcos.

Talks in Oslo had resumed on Monday.

As a prelude, the two sides each agreed to a ceasefire, but the truce commitment by the Communist side was due to end on Saturday.

Philippine President Rodrigo Duterte, who took office on June 30, has made resumption of the talks a top priority.

He has even sketched the possibility of forming a coalition government with the rebels.

His government said Monday it hoped to reach a peace accord within a year.

The two sides hope to breathe new life into the process by discussing simultaneously the outstanding issues of social and economic reforms, political and constitutional changes, and an end to hostilities.

Previous peace talks have addressed one issue at a time./rga

Your subscription could not be saved. Please try again.
Your subscription has been successful.
Read Next
Help wanted; must want to live in US
EDITORS' PICK
Philippine-United States alliance ‘rock solid’ — DFA
Makabayan bloc blasts bid to expand US access to more military bases in PH
Omega Speedmaster super racing: Tiny device massive change
Fuel price rollback expected on Feb 7
vivo Philippines offers a free bouquet of flowers and a premium necklace perfect for Valentine’s Day
House energy committee chair Arroyo bats for cheap electricity
MOST READ
Vice Ganda gets called out for ‘unfair treatment’ of ‘It’s Showtime’ co-host Karylle
Fuel price rollback expected on Feb 7
Kris Aquino gets ‘renewed confidence’ after consultation with new doctor: ‘I have a strong chance of getting better’
Pentagon tracking Chinese spy balloon over US
Don't miss out on the latest news and information.