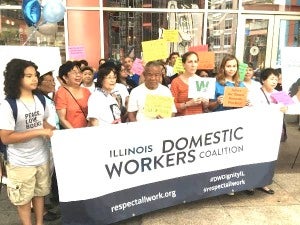 CHICAGO — Left out of federal labor law written decades ago, nannies, housekeepers and private caregivers are gaining legal protections in a growing number of states, with Illinois becoming the latest to establish a domestic workers’ “bill of rights.”

The Illinois rules, signed by Gov. Bruce Rauner this month, extend sexual harassment protections as well as minimum-wage pay and a guaranteed one day off in a seven-day work week to the domestic workforce, which is mostly female and immigrant heavy. Six other states have similar laws, but Illinois is now the first in the Midwest, and advocates say they hope to expand their efforts into the southern states.

Backers say the laws are needed because domestic workers are particularly vulnerable to exploitation: They work alone at odd hours and often live where they work. The pay can be measly and for immigrants, language and legal status can complicate things.

Last week, a Minnesota woman was charged for allegedly beating and starving a woman she brought from China to work as a nanny up to 18 hours a day.

“Working in someone’s home and the aspect of it being invisible work from the public view … it leaves a lot of room for workers to be mistreated,” said Yomara Velez, an organizer with the New York-based National Domestic Workers Alliance.

There are an estimated 2 million domestic workers in the country, 93 percent are women and one-third are immigrant, according to the Economic Policy Institute, based in Washington D.C. Household employees — including maids and cooks — weren’t included in 1930s labor law, though federal rules have since changed.

New York became the first state to add basic rights for domestic workers, outlining rules for overtime pay, days off and discrimination protections in 2010. Hawaii, Massachusetts, Oregon and Connecticut also added protections. California established temporary overtime pay rules for private domestic workers in 2013 and legislators approved an expansion this week. But Gov. Jerry Brown initially rejected a 2012 version of the plan over concerns about adding regulations and the cost and financial burden for families.

Those same questions were raised in Illinois, particularly with an initial version of legislation that noted vacation and overtime requirements. Republicans opposed to an earlier draft, along with a home care association, had questions about how hours would be tracked. But State Rep. Elizabeth Hernandez, a suburban Chicago Democrat who sponsored the measure, said it was pared back, amending four state laws to include domestic workers. The law then passed with bipartisan support before being signed by Rauner, a Republican.

Wendy Pollack with Chicago’s Sargent Shriver National Center on Poverty Law, which led the legislative push, said the biggest hurdle was awareness, since most people don’t think of people working in their homes as employees.

“It was not on anybody’s radar screen in any way,” she said.

Magdalena Zylinksa, a Polish immigrant, said the rules were desperately needed. She’s worked as a nanny, caregiver and housekeeper around Chicago for years.

As a live-in caregiver, she worked seven days straight and had to share a room with the elderly woman she tended. As a nanny for two children, she worked from 6 a.m. to 10 p.m., and was paid $40 daily. There were also safety concerns, such as when a male resident of a home where she cleaned and washed clothes with another worker would undress and linger in the laundry room.

At the time, Zylinksa was living in the country illegally. She’d overstayed her tourist visa and was afraid to call police.

“We didn’t think about anything else,” she said. “We were scared we were going to lose the (housekeeping job) and lose the money.”

National advocates said they’ll use the Illinois model as a blueprint. Velez said the way Illinois received bipartisan support, particularly with a GOP governor’s backing, is something that can help them make their arguments elsewhere, though plans haven’t been finalized.

Illinois’ law takes effect in 2017 and could impact an estimated 35,000 domestic workers, according to state labor statistics.

Grace Padao, now an organizer with the Chicago-based Alliance of Filipinos for Immigrant Rights and Empowerment, said she once worked seven-day weeks as a caregiver to support her family in the Philippines. She described feeling isolated working day and night alone.

“Domestic workers in Illinois will never have to endure the conditions that I did,” she said. “They will have the opportunity to live better lives.”