72% of Californians with no health coverage now insured 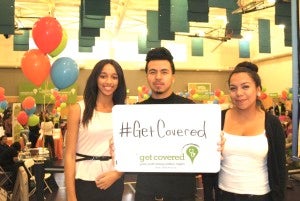 SAN FRANCISCO — Three years after California launched its online health insurance marketplace under the Affordable Care Act (ACA), nearly three-fourths of its 5.8 million previously uninsured residents now have insurance, according to a study released by the Kaiser Family Foundation (KFF).

But the survey, conducted in English and Spanish, found that one ethnic group was under-represented: Latinos.

One-third of Latinos who were uninsured three years ago still did not have any health insurance after the 2015 open enrollment, with individuals who may not be eligible for insurance comprising nearly half of this group. The ACA disqualified undocumented immigrants from federally subsidized insurance offered through Covered California.

But the majority of the uninsured said the cost of insurance didn’t “fit into the family budget,” said Bianca Dijulio, KFF’s associate director of public opinion and survey research.

Those on Medi-Cal, however, would be protected because the program is free or low-cost. The program is open to families that meet the income requirements, and has recently expanded to include all children, regardless of their immigration status. It is also open to those who have received Deferred Action for Childhood Arrivals (DACA).

For the rest, costs will likely remain a challenge as prescription drug prices continue to spike, and premiums in Covered California plans on average are expected to rise by about 13 percent next year.

KFF researchers first surveyed a representative sample of 2,001 uninsured Californian adults under the age of 65 in the summer of 2013, prior to the ACA’s first open enrollment period. It followed the same group of people over the next three years, concluding the survey last February after the third open enrollment period.

By interviewing the same group of people four separate times, Dijulio said she and her team of researchers were able to track changes in their insurance status and how health insurance affected their lives.

“We were trying to shed light on the first few years of the ACA,” Dijulio said of The California Endowment-funded survey.

One thing that became obvious to researchers, she said, was that for many of the newly insured, the ACA has provided “stable coverage.”